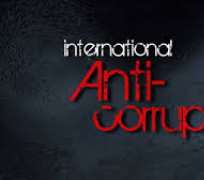 On Monday, 12th December 2016, the Kano State Government in collaboration with the Federal Ministry of Justice organised this year's International Anti-Corruption Day. The event was attendedby many government representatives including anti-corruption agencies, National Orientation Agency, states governments as well as representatives of donor agencies, activists, women groups, student leaders and civil society organisations from across the nation. Various speeches on combating corruption in Nigeria were presented.

In his presentation, the Attorney General of the Federation and Minister of Justice, Mr. AbubakarMalami SAN who led the team from the Federal Ministry of Justice(FMOJ)commended the initiative of the Kano state Government and the state GovernorAlhaji (Dr) Abdullahi Umar Ganduje and his team for remaining consistently focused on promoting culture of transparency and accountability in governance through the establishment of the State Public Complaints and Anti -Corruption Commission.

He confirmed that it is the first of its kind a clear indication that the fight against corruption is gaining momentum. Malami further commended the State Governor as a pace setter who has set an example worthy of emulation by other state governments.

The Justice Minister lamented that, "corruption undermines economic development, political stability, rule of law, social development, disrupts social order and destroys public trust in the governance system." According to him, a recent report released by the United Nations revealed that every year, $1 trillion is paid in bribes while an estimated $2.6 trillion are stolen annually through corruption globally. "The disturbing trend is that in Nigeria, we have established that the link between corruption, organised crime, terrorism and insecurity is one of the reasons why Nigeria has remained largely underdeveloped despite our huge natural resources endowment. "

AbubakarMalami also talked about the National efforts to combat corruption in Nigeria, the open Government Partnership National Action Plan, framework for the reform of the justice sector and actions taken to improve the prosecution of criminal cases in Nigeria. He used the occasion to present to the public the National Anticorruption Strategy(NACS), the Justice Sector Reform Action Plan and the Nigeria’s Open Government Partnership Action Plan(OGP-NAP) which was recently presented in Paris. The Attorney General called on every one to join the struggle in the journey to get the country rid of the menace of corruption.

On his part, the Special Adviser to the President on Justice Reform, Juliet Ibekaku, made an elaborate slideshow presentation on overview of National Anti-Corruption Strategy, the Open Government National Action Plan and the Justice Reform Plan to improve access to justice and represent rule of law on human right, strengthen legal drafting and law review process as well as prosecution, adjudication, enforcement and asset recovery mandates among others.

The Kano State Governor, His Excellency, Dr.Abdullahi Umar Ganduje who was ably represented by his Deputy, Professor HafizuAbubakardisclosed the theme of this year's conference titled "United Against Corruption for Development, Peace and Security." The Governor emphasised that the theme of this year’s International Anti-Corruption Day is very relevant to the contextual realities in the state and emphasised that the programme is one of the efforts in the fight against corruption which is the cardinal principle of the Kano State Government under the present administration.

The Governor disclosed that since 2015 when the administration came into power, it has done everything possible to reorganize the State Anti-Corruption Commission by making it function through provision of vibrant leadership and the non-interference policy, which earned public acceptance of the institution as an unbiased umpire. According to the Governor, the State anti-corruption commission has 44 local government offices aimed to enlarge the scope of its operation in terms of the fight against corruption and to bring it closer to the people. The Governor rated the performance of the State Anti-Corruption Commission as satisfactory in the last one year and has placed Kano State in a leading role in the country in terms of the fight against corruption as well as protection and promotion of human rights. Dr.Abdullahi Umar Ganduje later enumerated the achievements of the State Anti-corruption commission with delight and urged the Chairman not to rest in his oars. He called on other states of the Federation to replicate the Kano State Model of Public Complaints and Anti-Corruption in order to assist President Muhammadu Buhari led administration war against corruption.

At the occasion, the Elder statesman, Danmasanin Kano. Alhaji Yusuf MaitamaSule expressed confidence that despite challenges with the fight against corruption, President Muhammadu Buhari will succeed. "Buhari is morally sound, financially incorruptible, committed and patriotic leader that assumes power to rescue Nigeria. Nigerians should exercise patience because in this kind of fight, we must encounter some challenges, he said.

In his vote of thanks, the Executive Chairman of Kano State Public Complaints and Anti-Corruption Commission, Malam MuhuyiMagajiRiminGado thanked all the stakeholders in the fight against corruption for their attendance, which translate their commitment, fashion and zeal to the crusade against corruption. He observed that corruption is a cancer and major cause of under development that disproportionately affected the poor and reiterated that everyone should cooperate and be united in fighting corruption as common enemy. "Nigeria is endowed with abundant human and natural resources that could make the country one of the most prosperous and economically buoyant nations in the whole world. Sadly, however, corruption hampers the growth and development of our economy. Corruption fuels militancy which threatens corporate existence of our nation", Muhuyi said.

According to the Chairman, Kano Anti-Corruption Commission, Attorney General of Federation and Minister of Justice has been a source of pride and inspiration to the commission and indeed to all Nigerians. He thanked all sister organisations and relevant stakeholders at the Federal level. MuhuyiMagaji disclosed that preparations are on top gear for the training of about 200 members of the Commission at the ICPC Anti-Corruption academy.

He thanked the Executive Governor of Kano State for supporting the Commission to enjoy its independence without hindrance or unnecessary interference as provided by Kano State Public Complaints and Anti-Corruption Law 2008 as amended.

International Anti -Corruption Day is observed every 9th December of the year.

Uche Igwe is Doctoral Researcher
Sussex Centre for the Study of Corruption
Department of Politics, School of Law, Politics and Sociology