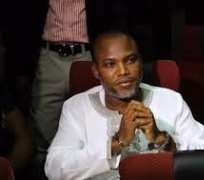 The Federal High Court on Tuesday in Abuja approved Federal Government's request to protect the identities of prosecution witnesses in the trial of detained Pro-Biafran leader, Nnamdi Kanu

The leader of the Indigenous People of Biafra (IPOB), is being tried along Chidiebere Onwudiwe, Benjamin Madubugwu and David Nwawuisi.

Giving ruling in the motion filed by Mr Mohammed Labaran, counsel to government, Justice Binta Nyako held that the application was meritorious.

She said the prayer to shield the names and addresses of the prosecution witnesses who were largely security operatives was not a bad idea, adding that the law supported it.

'It is therefore the court's order that the names and addresses of the prosecution witnesses shall only remain with the court.

'The prosecution witnesses who should appear in combination of alphabets will be given screens, which will be provided by the court.

'The defendants and their counsel will however be able to see the witnesses before they testify,'' Nyako held.

She further said: 'let the public not misconstrue the stance of the court as a grant for a secret trial.

'The court shall be open for public, including accredited journalists and families of the defendants.'

It would be recalled that the applicant had applied for all the witnesses to be allowed to testify behind screen.

The prosecution also prayed that the identities of the witnesses should not to be revealed in any record of the proceedings.

The defendants had vehemently opposed the application, contending that granting such request would amount to gross violation of their rights to fair hearing.

The defendants were alleged to have conspired to broadcast on Radio Biafra, which is monitored in Enugu and its environs, on cessation plans.

They were alleged to have committed treasonable felony, an offence punishable under Section 41(C) of the Criminal Code Act, CAP C38 Laws of the Federation of Nigeria, among others.

The judge adjourned trial until January 10, 2017.
Meanwhile, leader of the Indigenous People of Biafra (IPOB), Nnamdi Kanu, has said Nigeria would burn by the time he gives his testimony before the court in his alleged treason trial.

He also declared that President Muhammadu Buhari cannot intimidate him.

At a stormy court session in Abuja, yesterday, Kanu said the president may intimidate court judges, but not him.

'I will address this court! You cannot be killing my people and tell me that you will make me have a secret trial. That won't happen! The president can intimidate the judges, but he cannot do that to me. Tell him he has lied.

'I won't stand this travesty of justice. Buhari spoke in public, he accused me in public. I must also be allowed to stand my trial in public.

'This is nonsense! I will give testimony before this court! By the time I finish, there will be no Nigeria. This is no Sharia court. It is a court that operates under the common law.

The other defendants soon joined in the voice of opposition against the court's ruling and the session became rowdy.

Outside the courtroom, Kanu's supporters, who came from different states, protested the court's decision, shouting: 'We don't want secret trial, this is democracy, the trial of our leader must be conducted in public.'

Reacting to the trial, Chief Goddy Uwazuruike, a lawyer said 'the trial of Kanu has lost all pretence of judicial trial. It is now a political trial in all ramifications. Kanu is the first person to be tried in secret since 1999.

'Is this a fallout of the raid on judges? History is never kind to those who murder justice.'

There was wild protest yesterday after the Abuja division of the Federal High Court granted Federal Government's request to protect the identities of prosecution witnesses in the ongoing trial of the detained leader of the Indigenous People of Biafra, Nnamdi Kanu and his co-defendants.