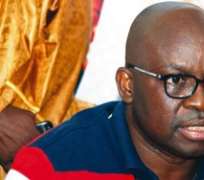 Fayose’s accounts in Zenith Bank be defrozen with immediate effect.

The accounts were frozen by the EFCC in June, this year.

However, in his landmark judgment today, Justice Taiwo Taiwo described

the EFCC action as illegal, wrongful, unlawful and unconstitutional.

The judge said the EFCC action breached the governor’s fundamental

rights to fair hearing, as the commission did not make him a party to

the proceedings for the interim freezing of the account.

that granted the interim freezing order that the two accounts that

were frozen belonged to Governor  who enjoys total constitutional

immunity.
Justice Taiwo also said that the EFCC did not provide any credible

not the owner of the accounts, which evidence has shown belong to the

Governor.
The judge ruled that being a person covered fully by Section 308 of

the 1999 Constitution, no legal proceedings can be instituted against

Governor Fayose.
He also said that any law including some sections of the EFCC acts

like Sections 28, 31, and 44 that expropriate citizens rights must be

construed strictly and usually in favour of citizens whose properties

describing the judge as courageous and firm.
He said the judge, by the judgement laid to rest all the abracadabra

of the EFCC in illegally, wrongfully, unlawfully and

unconstitutionally going about on a rampage freezing Nigeria citizens

woman and the guardian sentinel of the civil rights, liberties and