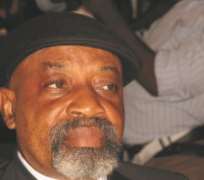 The Indigenous People of Biafra, IPOB, worldwide and its leadership have condemned those opposed to the new found courage of Ohanaeze Ndigbo.

The organisation equally commended Ohanaeze Ndigbo for their stance in supporting the ideals of the struggle for the restoration of Biafra.

A statement released by IPOB Spokesman, Emma Powerful,  fingered Minister of Labour and Productivity, Dr. Chris Ngige, as one of those opposed to Ohanaeze supporting Biafra restoration agitation.

The organisation described Ngige and his cohorts as political jobbers, who are feeding fat from 'the crumbs from the master's table,' pointing out that they should be ashamed of themselves for not projecting Biafran interest.

The statement read: 'The Indigenous People of Biafra, IPOB, worldwide and its leadership condemn those opposed to this new found courage of Ohanaeze Ndigbo. The opposers are all evil men whose intent is to perpetuate the master-slave relationship between Abuja and Enugu.

'People like Chris Ngige and other political jobbers feeding off the crumbs from the master's table should be ashamed of themselves and should know that the day of reckoning is fast approaching.

'Anybody or group of persons against the new found courage of Ohanaeze Ndigbo in supporting the quest for freedom for all must examine his or her conscience before offering an opinion.

'Nevertheless, we, IPOB members, have gone beyond the rent-boy era of politics in Igbo-speaking part of Biafra; that is something these no hopers should know.

'This is the time to embolden the few good men left in Igboland not to pander to the interest of political vultures, who have brought nothing tangible to the emancipation discourse championed by our leader Mazi Nnamdi Kanu and IPOB members worldwide.

'Our goal remains the attainment of absolute freedom indeed, not just in mere words for all oppressed peoples of Biafra and beyond.

'We also commend the Ohanaeze leadership for demonstrating the leadership charisma for once throughout their period in office as executive in Igboland.

'As long as the Ohanaeze Ndigbo and other groups and social cultural organizations in Biafra land remain on the side of the truth without fear or favour, IPOB and its leadership will continue to support every of their initiatives aimed at liberating, emancipating or promotion of our people.'