Gross darkness will yet envelope Nigeria, unless…: Bishop Oyedepo 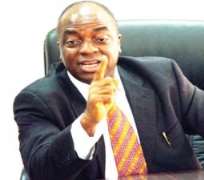 Oyedepo, who was quoted in a live streaming broadcast, described the economic downturn in the country as a holocaust.

He noted this at Canaan Land in Ota, Ogun, during the annual Winners Chapel prayer convention, Shiloh 2016, tagged “My Case is Different'', taken from Genesis Chapter 47 Verses 15 to 27.

The News Agency of Nigeria (NAN) reports that the annual programme which had ended was a mountain of divine encounter for salvation healing and deliverance and a time of astounding miracles.

The yearly programme was also a time of testimonies of liberation in all facets of human existence that focused afflicted, battered, beaten and tattered destinies as a result of pains, pangs and crying.

He also encouraged Christians in the aspect of giving, adding that anyone who keys into kingdom investment covenant would overcome hardship.

“Any one who keys into the kingdom investments covenant will overcome the gross darkness that awaits the world.

“As Christians, you should understand and have the spirit of giving no matter what it takes to give,'' Oyedepo said.

Reacting to the programme, some FCT residents expressed joy and fulfilment from the Shiloh, saying they had a lot to be grateful to God for.

Mrs Deborah Peters, a member said that Shiloh was a refreshing programme that was meant to make every Christian to experience divine breakthrough and increase in their lives.

Peters advised Christians to be open minded with their concerns at this period and all times so that they would encounter God's visitation.

“We have to make sacrifices of giving like Papa pointed out so that we will encounter increase, breakthrough, unending grace, protection and even deliverance.

“For us to gain all of these, we have to, with the help of the theme of Shiloh open up to God to have his way in us.

Mrs Rose Benjamin, a member that attended the programme from Kaduna, urged Christians not to take their encounter with God for granted for it must be followed with testimonies.

According to Ben, she encountered God because she believed Him for a divine intervention in the aspect of pregnancy and her prayers were answered.

“God took me to a different level I never expected; that is why it is good to pray fervently without season.

“My husband and I prayed and believed God for divine intervention; it was our topmost prayer point and we held onto every prophecy declared by Bishop.''

On his part, Mr Damola Arogundade, a driver, said he encountered God's presence in the 2012 Shiloh after he had obeyed all what Bishop asked the congregation to do during the impartation service.

Prominent clerics from all works of life were represented at the programme as well as nations.