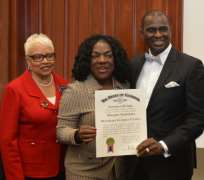 Hewas conferred with the award on Wednesday, 7 December, 2016 in the U.S at a colourful eventat the Georgia State Parliament (Capitol) in Atlanta, Georgia

According to the award’s citation, “the special honour is in recognition of Mr. Ogunsanya’s outstanding leadership of Airtel and its services to humanity; having laid an impregnable foundation for the future prosperity of Airtel Nigeria; as well as being an advocate for the economic development of Africa in his leadership roles in many countries in Africa working for The Coca-Cola System.

“The Board in its recommendation letter for this honour, maintained that Airtel Nigeria under your leadership has been positioned as a leading and innovative service provider, expanding the frontiers in Nigeria’s telecommunication sector; as you remain a face representing integrity in Africa’s private sector.”

Mr. Ogunsanya whilereceiving the award from Mrs. Dawkins-Haigler,commended the organisers and dedicated the award to all Airtel customers in Nigeria and across Africa.

He said: “Our customers are not the only reason why we are in business today, but they are the major reason for all our successes. I also thank everyone, especially all our stakeholders, for reposing such a high level of confidence on me and the Airtel brand and also for their invaluable support. Without a doubt, this kind support from our customers has made us the third largest telecoms company in the world, today.

“Indeed, I feel energized, determined, motivated and greatly encouraged to continuing in this great journey of creating value for people and enriching the lives of more people,” he added.

Speaking further, Mr. Ogunsanya urged Africans and well-meaning individuals and organizations around the world to strive to support causes that will empower young Africans with quality education, noting that quality education is panacea for poverty eradication.

While speaking on Airtel’s effort at supporting education through its popular Adopt-a-School programme, the Airtel CEO noted that individuals and organizations in the public and private sector will need to come together to bridge the literacy and quality education gap that currently exist.

“Weneed to offer more opportunities of quality education to more people as this will lead them out of poverty. We owe it to the future generation to lay a solid foundation for them”

He alsoenumerated on otherinitiatives which Airtel Nigeria has embarked on to improve the quality of lives of underprivileged people.

The event was jointly organised by Organisation of World Leaders and Africa Leadership Magazine.