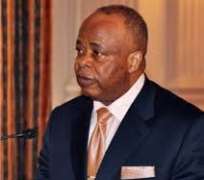 Former Senate President, Chief Ken Nnamani, has praised the remarkable leadership qualities of Enugu State governor, Ifeanyi Ugwuanyi, whom he described as a leader who would rather deploy the state's resources on projects that positively affect people's lives without the least publicity.

Nnamani, who made the remark at the 17th Convocation Ceremony of the Enugu State University of Science and Technology (ESUT) where Ugwuanyi was conferred with an honorary doctorate degree in public administration, noted that the governor was 'moving in the right direction and deserves everyone's support'.

The convocation also featured the launch of a book, Law, Governance and Development, written in the governor's honour. The book's reviewer, Professor Joe Irukwu complimented Ugwuanyi's achievements, describing him as a 'renowned scholar committed to the advancement of education'.

Thanking the university for the honour bestowed on him, Governor Ugwuanyi said it's gratifying that his administration's support to ESUT has yielded fruits which is evident in the institution's recent listing as the best state-owned university and 17th best overall in the entire country.

'As a government and in line with our promises, we shall continue to place high premium on the improvement and quality of staff at ESUT,' he said, adding that he remained committed to the goal of enthroning academic excellence in the state and ensuring that affordable and qualitative education was available to all.

Other recipients of the university's honorary doctorate degrees include Governor Dave Umahi of Ebonyi State, Engr. Emeka Okwuosa, Prince Jeff Nnamani, Chief Phillip Asiodu and Prince Arthur Eze who commended Governor Ugwuanyi for his prudent management of the state's resources and prioritizing the welfare of workers.