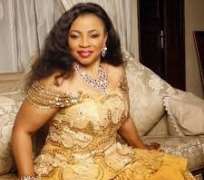 Africa's richest woman, Dr. (Mrs.) Folorunsho Alakija, has told Nigerian youths the secret of becoming successful entrepreneurs, urging them to 'go the extra mile' to excel in whatever field or vocation they might find themselves.

The Nigerian billionaire fashion-designer and Executive Director at FAMFA Oil, an indigenous Nigerian oil and gas exploration and production company, specifically reeled out a four-cardinal principles which she claimed should be the hallmarks of a forward-looking and enterprising youth in business.

Alakija recently bared her mind in a speech delivered at Ajayi Crowther University, Oyo where she was awarded a degree of Doctor of Science (Honoris Causa) by the Senate of the University on the occasion of its 8th Convocation ceremonies.

While urging Nigerian youth to imbibe positive characteristics notably motivation, passion, diligence, integrity and Godliness in all they do, Alakija urged them to go the extra mile by believing in themselves, shun negative mind-set, never take 'No' for an answer and be ready to take risks, noting that these factors had personally helped her in her enterprise spanning decades,

Relating her personal life experience with Nigerian youth, she said: 'Believe in Yourself:  Do not judge your success or failure by your surroundings. Don't allow the situation in the country or economic news and numbers influence your judgement of your ability,' she said.

She urged those who would succeed in business not to have a negative mind-set. Alakija said: 'I have a personal mind-set which I have imbibed over the years.'

Another strategy for winning in business she said is to 'Never take 'No' for an answer'. She said in one of her many activities in the oil business she had an opportunity to broker a transaction for a client who wished to lift crude oil; this failed.  'At the back of my mind, I reasoned that I had nothing to lose if I pursued another business on the side.  I began to look for contracts such as catering services for offshore crew or transportation services for moving crude oil,' she noted.

They were turned down but she was bent on not backing out, she revealed. 'I was informed that the federal Government had a new policy to encourage and empower indigenous oil companies to prospect for oil. The sector had been dominated by foreign multinationals. I decided to apply for an oil prospecting license.

'I perceived that since the government was disposed to boost local participation in that sector, it would make the process easier for Nigerians; how wrong I was!  It took three long years, three petroleum ministers and three different applications before it was finally allocated,' she narrated her business sojourn.

'You must be ready to take risks', said Alakija. To succeed in any business, the female business mogul said one must be prepared for this aspect.

'Our company was allocated an oil block 5000 feet deep in the middle of the ocean.  (I named it 'Agbami' meaning deep waters in Yoruba Language because of its location.)  The scheme was under a sole risk scheme for indigenous companies in which we had invested all our life's savings.  It took us 15 years before we were able to strike first oil from the well.

'We had to invest almost all of our life savings into the project.  If we had not struck oil, we could have lost everything.  However, if you are going to succeed in this life, you need to go the extra mile by being ready to take risks. If you are risk averse you are not likely to go far in life,' was her soothing words to prospective entrepreneurs.