Quarter of the world's children live in conflict or disaster-stricken countries: UNICEF 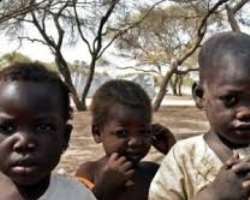 Sub-Saharan Africa is home to nearly three-quarters – 393 million – of the global number of children living in countries affected by emergencies, followed by the Middle East and North Africa where 12 per cent of these children reside.

The new figures are released as UNICEF, on Sunday 11 December 2016, marks 70 years of relentless work in the world's toughest places to bring life-saving aid, long-term support, and hope to children whose lives and futures are threatened by conflict, crises, poverty, inequality and discrimination.

“UNICEF was established to bring help and hope to children whose lives and futures are endangered by conflict and deprivation, and this enormous figure – representing the individual lives of half a billion children – is a sharp reminder that our mission is becoming more urgent every day,” said UNICEF Executive Director Anthony Lake.

The impact of conflict, natural disasters and climate change is forcing children to flee their homes, trapping them behind conflict lines, and putting them at risk of disease, violence and exploitation.

·         Nearly 50 million children have been uprooted – more than half of them driven from their homes by conflicts.

·         As violence continues to escalate across Syria, the number of children living under siege has doubled in less than one year. Nearly 500,000 children now live in 16 besieged areas across the country, almost completely cut off from sustained humanitarian aid and basic services.

·         In northeastern Nigeria, nearly 1.8 million people are displaced, almost 1 million of them are children.

·         In Afghanistan, nearly half of primary-aged children are out of school.

·         In South Sudan, 59 per cent of primary-aged children are out of school and 1 in 3 schools is closed in conflict affected areas.

·         More than two months after Hurricane Matthew hit Haiti, more than 90,000 children under five remain in need of assistance.

The emergencies faced today by the most vulnerable children threaten to undermine immense progress made in recent decades: Since 1990, the number of children dying before their fifth birthday halved and hundreds of millions of children have been lifted out of poverty. Out-of-school rates among primary-school-aged children have reduced by more than 40 per cent between 1990 and 2014.

Despite significant progress, too many children are being left behind because of their gender, race, religion, ethnic group or disability; because they live in poverty or in hard-to-reach communities; or simply because they are children.

“Whether children live in a country in conflict or a country in peace, their development is critical not only to their individual futures but also to the future of their societies,” said Lake.