Don't use Refineries as Collateral for your $30billion Loan - PENGASSAN 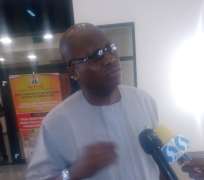 The two major unions in the oil and gas sector in Nigeria have vowed to resist any attempt by the federal government to use the nations refineries as collateral for the proposed $30billion Loan.

This was revealed during the public hearing in the Senate of the Joint committees on petroleum downstream, midstream and upstream sector, where members of the public and stakeholders were expected to submit memoranda to assist the lawmakers come up with laws that will strengthen the productivity and efficiency in the sector. The Senate began the 3days public hearing on the new Petroleum Industry Governance Bill 2016 (PIGB) and it served as the perfect platform for union members to express their concerns and displeasure over government policies that affect them.

One of the submissions received was from the NNPC which proposed the creation of three new entities namely : The Nigeria Petroleum Regulatory Commission (NPRC) which will serve as a regulatory entity for the entire petroleum industry (Upstream, Midstream and Downstream), the Nigerian Petroleum Assets Management Company (NPAMC) as counterpart administrator of production sharing agreements and such other risk based agreements as the government may decide to conclude and the Nigeria Petroleum Company (NPC) as a vertically integrated oil & gas company operating as a fully commercial entity across the value chain.

Some of these recommendations apparently did not go down well with the oil and gas union members around as they also presented their position on several policy proposal of the NNPC that betrayed the insensitivity of the government towards the plight of workers in the industry. One major speaker who presented a position paper on behalf of the workers was Comrade China H. Onuegbu who was the PENGASSAN National Industrial Relations Officer.

In his presentation he noted that the Petroleum Industry Governance Bill 2016 (PIGB) contains some of the obnoxious provisions of the 2012 Petroleum Industry Bill (PIB), such as excessive wide discretionary powers to the minister in charge of petroleum. According to the report it also gives the proposed NPRC the powers to make regulations without public hearing or due consultations which is completely alien to constitutional democracy. The report also added that the non inclusion of the Petroleum Host Community Fund in the Bill clearly reveals a very strong lack of inclusion on the part of government, which he claims attributes to the incessant vandalism and destruction of oil & gas assets within oil producing communities.

Another vociferous advocate for transparency and probity in the sector is the current president of PENGASSAN Comrade Francis O. Johnson who also berated the political class for the lack of sincerity in the industry. According to him despite the impressive turnout of stakeholders for the public heating on the Senate people should stop seeing NUPENG&PENGASSAN as trouble makers in the industry, everyone should consider ourselves as stakeholders in the industry where no one is more important than the other, while the government he demanded needs to do better in terms of following the right procedures in terms of engagement for better operations within the sector which is the only way to avoid the issue of strike action.

Regarding the issue of sale of Refineries and government assets in the industry that was initially contemplated by the federal government which was vehemently resisted by the unions, the last may not have been heard of that issue as speculations making the rounds in the industry indicates that the nations oil and gas assets may be used as collateral for the $30billion loan. The union leaders were however quick to dispel them as mere rumours and speculations even though they remain committed to protecting the rights of their members whenever such arises anytime in the future. He also added that if the government is so desperate to privatise or sell these critical national assets, the NLNG model should be used, "of course we can all remember the role the NLNG played during the issue of bail out of state arose, so if the NLNG was sold off by previous administration where would the government get the funds to bail out the states at such dire moment? " he asked.

Uchechukwu Ugboaja is a freelance investigative Reporter writing from Abuja