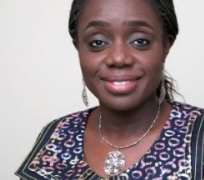 Minister of Finance, Kemi Adeosun made this known to State House Correspondents after the federal executive council ( FEC) meeting presided over by President Muhammadu Buhari at the presidential Villa.

She was joined at the briefing by the Minister of Information, Lai Mohammed and Environment Minister, Amina Mohammed.

According to her, the one billion euro bond programme is part of the funding of the 2016 budget and expressed hope that the process will commence in January .

She said ;My memo which was  approved by council was for the appointment of the transaction parties for the 1 billion dollars euro bond issue.

She pointed out that  the federal government obtained a certificate of no objections from the Bureau of Public Enterprise ( BPP)  for the appointment of those parties, having undertaken a fully competitive open tender process.

She expressed confidence that the government  would be able to complete these transactions expediently as there is already significant interest and the oil price stability is helping the government .

“Currently there is quite a bit of demand for emerging market paper. Nigeria's paper count is trading around the 7 to 8 percent mark. Angola came out in November with bench UAD I.56 AND GABON in june  did 8.25 plus Ghana in September did 9.25.

So we're expecting to get quite a competitive pricing on the issuance programme which as I said is to be used for the purposes of funding capital projects  as part of the 2016 budget within the month of January.

On her part, the Minister of Environment said the federal government is in the process of  finalising  the amendment to the gazette of the establishment of the hydrocarbon pollution restoration process/purchase  which is  the vehicle that is supposed to have all the government structures to allow them  to  clean up  the Niger Delta beginning with Ogoni land and the implementation  of the UNEP report.

She noted that the past gazette did not put in place some of the government structures they  need such as the government board, like the board of trustees or a structure that would be held accountable for the enormous amount of money that is already available to spend .

Mohammed  said  the additional monies that the government  can leverage from the money that they  have that is being offered by different partners  to come into cleaning up and then dealing  with the livelihoods after.

“This now will enable us to put more structure to the board of trustees who require a legal entity to put the  resources in and then we hope that in the new year we will begin to roll out, to begin with the building of the centre of excellence.

“The integrated soil treatment centre will also go up and then we begin training but in this case we start training many of the women on the livelihood side in the many of the contaminated areas.

So we have to find better ways of speaking with communities but also ensuring that livelihoods of women are not affected.  We are also speaking to many of the young people there, we have a good feedback from those who are interested in being a part of the rollout of the clean up ogoni land in the new year,” She stated.