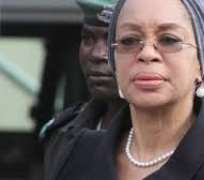 The Economic and Financial Crimes Commission, EFCC is questioning the children of Justice Rita Ofili-Ajumogobia as part of the investigations into the allegations that their mother received a total of $793,800 in several tranches from different sources unlawfully between 2012 and 2015.

The children of the embattled justice were at the at the Lagos office of the commission for several hours on Wednesday.

Ofili-Ajumogobia was alleged to have collected bribes through a company account in Diamond Bank, Nigel & Colive Ltd, which she owns jointly with her children.

According to reports,  a Senior Advocate of Nigeria, Godwin Obla, allegedly paid a N5m bribe to the judge through the account.

The reports indicated that the  the EFCC had invited the judge's children since last week but they refused to honour the invitation.

In order to enforce compliance,  the operatives of the anti-graft agency on Wednesday  stormed the judge's home located on 18 Lai Ajayi-Bembe Street, Parkview, Ikoyi with a search warrant on Wednesday.

He was said to have promised to ensure that the children were brought to the EFCC office in the afternoon.

A detective said, “About a week ago, we gave an invitation letter to Justice Ofili-Ajumogobia and asked her to give it to her two children. However, they never honoured the invitation. So, today (Wednesday), we went to the house with a search warrant but they refused to open the door. A former Minister, Odein Ajumogobia, who happens to be the judge's brother-in-law, promised us that he would bring the children around 3pm, so we left.

“We invited her children because their names featured in our investigation. So, we invited them to hear their own side of the story. The minister honoured his promise because the children were brought to our officer around 3pm.” The EFCC, in the charges, alleged that Obla, while appearing in a suit numbered FHC/L/C/482c/2010 before Justice Ofili-Ajumogobia, offered a gratification of N5m to the judge to allegedly induce the judge to refrain from acting in the exercise of her official duties as a public officer.

Obla, the EFCC claimed, paid the money from the account of his company, Obla & Company Limited, with United Bank for Africa, to Justice Ofili-Ajumogobia through the bank account of Nigel & Colive Ltd in Diamond Bank Plc.

But they both pleaded not guilty to the offence.
The judge was accused of receiving a total of $793,800 in several tranches from different sources between 2012 and 2015 “so as to have a significant increase in your assets that you cannot reasonably explain the increase in relation to your lawful income.”

The EFCC told Justice Oshodi that Justice Ofili-Ajumogobia violated Section 82(a) of the Criminal Law of Lagos State, No. 11, 2011.

The judge was further accused of forging a deed of assignment between County City Bricks Development Co. Ltd and Nigel & Colive Ltd dated July 5, 2010, which the EFCC claimed was purportedly prepared and signed by Charles Musa & Co.

The offence was said to be contrary to Section 467 of the Criminal Code, Cap C17, Law of Lagos State of Nigeria 2003.