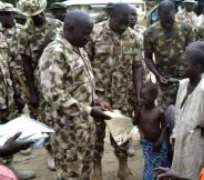 Nigerian troops under the aegis of  “Operation Rescue Finale” have rescued 801 persons in renewed operation to rescue remaining hostages and clear terrorists from the Sambisa Forest stronghold.

Irabor made the statement on Wednesday in a live press conference in Maiduguri, the capital of Borno State.

A report by Channels Television quotes him as saying,  “On 30th November 2016 the troops cleared Goneri before harbouring at Goni Kurmi. While at harbour at Goni Kurmi the troops were attacked by the Boko Haram terrorists with the hope of slowing down their push.

“The attack was successfully repelled with the Boko Haram terrorists suffering casualties. The troops recovered one AK 47 rifle, different calibres of ammunitions and magazines”.

According to him, the troops advanced and cleared all Boko Haram terrorists camps on their axis in the forest seen as their safe haven before harbouring at Amdaga on the first day.

“The following day, troops cleared and occupied Dure and have been operating in the general area to intercept fleeing Boko Haram terrorists”.

According to him, in all the operations between November 23 to December 5, a total of 801 persons were rescued from the Boko Haram terrorists.

Irabor warned the Boko Haram elements to give up their ignoble adventure, advising them to surrender to the military or other security agencies without further delay.