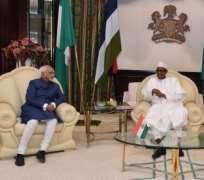 Indian state-run oil refiners have called for Nigeria to increase its total term contract volumes next year by more than 20% as demand from the South Asian country climbs, an official from Nigeria's state-owned Nigerian National Petroleum Corporation said.

This request comes a few weeks before Nigeria's crude oil term lifting contracts for 2017 are finalized, which will be decided by mid-December.

India as the largest buyer of Nigerian crude, has always said it should have a longer-term arrangement with NNPC to ensure security of supply.

"Three Indian companies mentioned that they are looking for a combined total of 11 million mt [in 2017] from 9 million mt [this year]," Anibor O. Kragha, group executive director at NNPC, in an interview on the sidelines of the Petrotech conference in New Delhi late Monday.

"Now what they will get is a balance between term contracts and [spot] sales contracts," he added.

The Nigerian crude oil term contracts involve the export of around 1.17 million b/d of Nigerian crude, out of the 2.2 million b/d the country can theoretically produce. They are then sold by contract holders to end-users, refiners and other buyers.

But with Nigerian oil output sharply down due to renewed militancy, the term volumes could be much lower for 2017 if output does not rebound.

Nigerian oil output had recovered sharply after it fell to a 30-year low in early summer but renewed attacks on oil infrastructure in the Niger Delta have shut in production of popular export grade Forcados in the past month.

He said output could reach 2.2 million b/d if the militancy issues were resolved by early next year.

NEGOTIATIONS ONGOING
Kragha said that negotiations are ongoing and that he was not sure if the deal would materialize, but he added that once Nigerian output recovers, it will "increasingly look towards India" as the major buyer of its crude.

"Indian demand is very positive for us. A vibrant Indian economy is good for us," he said.

The two countries have been working on a memorandum of understanding in the past month to enable the participation of Indian companies in Nigeria's upstream and downstream oil and gas sectors.

The deal being negotiated by Nigeria will also have the Indian government make an upfront payment for the purchase of Nigeria's crude on a long-term basis as well as Indian public sector companies investing in Nigerian refineries.

Indian state-owned refiners tend to buy most of their crude on term contracts while their remaining requirements are sought via tenders.

"We just came out of a meeting with key Indian oil companies and they are pushing to get incremental allocations for the term contracts," said Kragha. "We explained to them that there needs to be a balance."

INDIA'S RELIANCE ON NIGERIAN CRUDE
India is a significant buyer of Nigerian crude, which is largely light and sweet, rich in gasoline and diesel and low in sulfur, and meets the needs of Indian refiners.

A source from an Indian refiner told Platts that Nigerian crude is a must for most of its refineries, especially the older ones, which have been designed to run light sweet crudes.

India, which is currently among the world's fastest growing economies, has seen its gasoline and gasoil demand climb sharply over the past few years. This has encouraged Indian refineries to buy more Nigerian crudes.

The South Asian country also imports some 2 million mt/year of LNG from Nigeria.

Every month almost 20-25% of total Nigerian crude exports travel to India, particularly to IOC, which is the main recipient of Nigerian crude.

Indian refiners like IOC, HPCL and BPCL are currently on crude oil term lifting contracts for 2016 with NNPC.