@ElRufai: What Law Justifies Concealing The #ZariaMassacre And SecretMass Burial For Months? 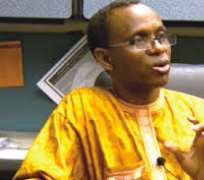 It is said that when God wants to destroy you He may first take away your sanity. It sadly appears Nasir Ahmad El-Rufai the governor of Kaduna has lost his sanity.

Too many lives he has participated and assisted in taking must have affected his ability to reason soundly, it sadly appears. There is a toll on the mind from the weight of souls of the unjustly killed and the dead being denied justice.

In a recent White paper where the Kaduna governor rejected many recommendations of his own Judicial panel on the Zaria Massacre , governor el-Rufai defended the secret mass burial of hundreds of Muslims in Mando cemetry last year December. While the defenses given have been squarely trashed in our previous releases , to easily prove the governor's criminal behaviour we put one simple question to him.

Dear el-Rufai. Kindly show us where Kaduna state law and the United Nations conventions or conflict rules justifies the concealement of a mass masscare of 350 people and the secret mass burial of same.

The Nigerian army in suit with governor el-Rufai concealed the fact that over 350 Nigerians were killed in the events of December 2015 till April this year after Human right groups discovered and exposed Mando mass grave in February.

We await governor el-Rufai's defence of this crime against the living, the bereaved and the dead whose graves are yet to be exhumed and investigated one-year on and who are yet to be properly buried.