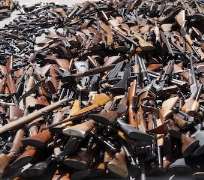 The command's spokesman, Ebere Amaraizu, disclosed this in a statement made available to newsmen in Enugu saying the suspect was apprehended on Tuesday through intelligence supplied to police operatives in 9th Mile Police Division, near Enugu.

“The suspect, who gave his name as one Samaila Garuba Alhaji, a.k.a. Bakasi, was earlier implicated by Ibrahim Adamu as the one that sold the AK47 rifle to him,” the statement read.

“But following Adamu's arrest, Samaila Garuba Alhaji, escaped when he got the information about the arrest of Ibrahim Adamu.

“Luck, however, ran out of Bakasi, as he is fondly called, when he was trailed to a motor park situated at 9th Mile in Enugu early this morning where he was nabbed after he made several efforts to escape.

“The suspect has been helping police in its investigation in relation to his nefarious activities.”