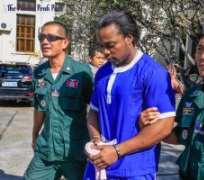 A Cambodian  Appeal Court sitting in Phnom Penh on Tuesday upheld hefty sentences for three foreigners convicted of smuggling heroin, among them Australian woman Yoshe Taylor, who claims to be a victim of an elaborate love plot and drug scam.

A report by Phnom Penh Post indicated that the case became a topic of renewed international interest last month after a joint investigation by Australian broadcaster SBS and Fairfax Media highlighted the Australian Federal Police's role in Taylor's arrest on Cambodian soil, despite them having evidence she had fallen prey to a drug-trafficking ring.

According to the report, based on information from Australian authorities, Taylor – along with French national Charlene Savarino – was arrested at Phnom Penh International Airport on September 18, 2013. Precious Chineme Nwoko of Nigeria was arrested and charged later that day.

According to SBS and Fairfax, Nwoko, who went under the name “Precious Max”, was the mastermind behind an online plot to entice multiple women to smuggle drugs.

Taylor met Precious Max online and a romance blossomed between the pair over the course of a year, during which time he convinced her of his business's legitimacy with doctored documents.

At his request, she agreed to take a bag containing traditional Khmer clothing back to Australia, but Cambodian police swiftly uncovered more than 2 kilograms of heroin inside.

At least two other women allegedly ensnared by Precious Max were arrested in Australia, where they were found to be victims and were not prosecuted, SBS and Fairfax reported.

Taylor, however, spent the last three years in Cambodia's PJ prison, and in a hearing lasting less than five minutes yesterday, the Appeal Court upheld her guilty verdict and her 23-year sentence – as well as Savarino's 25 years and Nwoko's 27 years.

Taylor was not present for the rejection of her appeal, but her lawyer, Khiev Van, said she was used as “fishing bait” by Australian authorities who had full knowledge of her situation.

“She is a victim in this case . . . She was lied [to] by the other two people, that's why she appealed,” Van said. “The Australian police knew the situation.”

Savarino and Nwoko also missed yesterday's hearing due to traffic delays en route to court, but Savarino later told reporters her sentence was unjust. “We were sentenced in the wrong way,” she said, maintaining that the punishment – greater than some murder cases – did not fit the crime.

Nwoko, meanwhile, when asked about the victims of his purported scheme, became aggressive and told reporters to “get out”.

Van said he did not know yet if Taylor would make a final appeal to the Supreme Court.