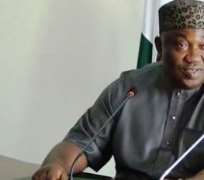 Those who witnessed the ground-breaking ceremony of the Enugu Free Trade Zone, ENPOWER FTZ, last week, were impressed with the turnout of dignitaries and the motivation of the citizenry towards actualizing an economic hub in South east Nigeria even as the state government is also planning another industrial park in Enugu which will be the biggest foreign investment south of the Sahara, propelled by a Chinese private investment.

Saturday Vanguard gathered that after a careful survey of economic activities in Africa, a Chinese group known as GoalMark group, traced most of the Sino-Nigerian trading activities to the people of South East, Nigeria and decided to set up an industrial park in Enugu state. The public-private sector imitative is a project between the state government and the prospective investor – Goalmark group of Beijing- China through the coordination of a Nigerian company- Superjet Industrial Company Limited based in Enugu.

Gains of investment
During the signing ceremony of the MoU, GoldMark group’s delegation from China led by one Mr.Lin Feng said “the company decided to go ahead with the project after a careful study from which we confirmed Enugu as a suitable place for it. The project which will cost billions of dollars to complete will bring massive investments to Enugu from all over the world and ensure the tremendous improvement of the economy of the state and environs.

Most Chinese companies shipping goods to Africa will move down to Enugu and set up base within the industrial park from where they will distribute or export to other African countries.” Going by the proposed investment, the Industrial park is to comprise investments in such major areas as coal mining, power generation from coal and water treatment plants as well as cassava and rice processing concerns.

The Industrial park is made up of various zones such as a Residential zone that would warehouse a well serviced residential estates with over 20,000 housing units comprising of flats in high rise apartments of 35 floors each and duplexes; a Free Trade Zone; a Commercial Zone covering a modern 500 shops wholesale, warehouses, shopping complex, malls, bus terminals, sports recreational facilities, office spaces on several high rise buildings, hotels and more; an Industrial zone designed to accommodate light, medium and heavy industrial complexes with a capacity to host over 250 industries and the industries will be provided with state of the art environment for indigenous and foreign industrialists.

It will also accommodate an Agricultural zone, a large area covering over 700 hectares of land for modern and high yield crop and live stock production complete with modern abattoirs and produce market that will also serve as a training environment for local farmers; There will also be power infrastructures providing 24 hours power for both the residents and industries from a 300 mw thermal power plant powered by coal. Also included in the plan is for an establishment of a specialized school for training of manpower to handle the various investments that the park will be attracting.

Ugwuanyi’s foresight
Governor Ugwuanyi had since May this year developed road to the site through Nchatach-Nike including other communities of Oruku, Akpuoga-Nike, Owo and Amechi-Idodo. The Governor severally went to the host communities to resolve the issue of the 2, 632 hectares land acquisition for the project. The President General of Nchatacha community, Chief Fredrick Edeh, confirmed to Vanguard on Ugwuanyi’s effort at reaching amicable resolution with the host communities which brought about an access road developed to the site of the project.

The General Manager of the facilitating private investor company, Superjet, Mr. Emeka Ugwu, who was at the ground-breaking ceremony of the Enugu Free Trade Zone, said that the ENPOWER FTZ would not affect the proposed Enugu Industrial park but would rather complement each other. He stated that the Chinese decided to set up the industrial park because of the interest of the people of the south east in industrialization. “It is a real estate development designed to gather critical infrastructure in one locality so that the aggregated infrastructure becomes cheaper.

The choice of Enugu
“It’s like a new city to contain 250 factories and will also house residential estates. The choice of Enugu for the location is because the state is strategically located for access by 26 out of 36 states within 24 hours and the state hosts an international airport. We have acquired the mining lease for coal which will be used to fire the power for the industrial park.

Our social responsibility includes scholarships, employment, trainings and will take care of host communities and government will take care of revenue generation through personal income tax. In the next 6 to 8 years everything will take shape,” disclosed Ugwu. It was based on the unprecedented industrial revolution and economic activities coming in the state that Governor Ugwuanyi requested from the Federal government to commence construction of a second runway at the Akanu Ibiam International airport.

He stated that the establishment of the Free Trade Zone has created an urgent need for the construction of a second runway at the airport in order to accommodate the expected increase in air traffic. “We therefore invite the Federal Aviation Authority of Nigeria, FAAN, to present to us, a plan for this project and we affirm the availability of land required for its actualization.

We further appeal to the Federal Government to ensure that the Airport meets with all internationally accepted standards especially by extending and resurfacing the existing runway and installing or building facilities that would improve night operations and accommodate heavier aircrafts that are normally used for international and intercontinental travels.

Offers galore
The Deputy Head of Mission at the Czech Republic Embassy in Nigeria, Mrs. Hana Klucarova, who was at the function said that her country would partner and work with the Enugu State government in order to make the free trade zone a success. Also speaking, the Managing Director and Chief Executive Officer of the ENPOWER FTZ, Engr. Emeka Eneh, said the project would stimulate trade and investment beyond oil when operational as well as provide massive opportunities for employment.

He explained that of the 35 operational free trade zones in the country, Enpower Enugu Free Trade Zone located near the Akanu Ibiam International Airport Enugu and its 9th Mile Corner annex is the first free trade zone to be established in the South East zone.

Visionary leadership
The state commissioner for commerce and Industries, Mr. Sam Ogbu-Nwobodo said “The state government is enhancing the Private public initiative designed to mop up most of the unemployed youths in the state. It’s a great industrial hub that will create 30,000 jobs and will help in diversifying the economy. It’s a unique partnership that allows you process export commodities and has N240b expected direct foreign investment. About 5000 companies will operate the ENPOWER; it is the same manner that China and Dubai were created on free trade zones.

“The specialized industrial clusters to be developed within the free zone areas include the manufacturing centre and whole sale market; the Aviation and Aerospace cluster; the power, utilities and light manufacturing cluster; the Health care park, the Business and Hospital park; Technology and Digital Media Park; and the Chemicals and Agribusiness cluster.”