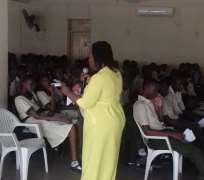 Avail International Consults Ltd (AICL Education), an organization set up to help students and Nigerians in general fulfill their dreams of studying and or relocating abroad, has unveiled a special quarterly career workshop for Secondary Schools in Lagos State.

According to the Managing Director Of AICL Education, Mrs Bola Agunbiade, the workshop is designed to sensitize Secondary School Students in Lagos and Nigeria in general on available scholarship opportunities in higher institutions within and outside the country and also to educate them on their career prospects.

At the inaugural workshop, the AICL Team stormed Bethel International College, Ojodu on the 23rd of November, 2016 and had many of their senior students in attendance, as well as some of their teaching staff, Principal and Proprietor to grace the event.

On the 24th of November, the team proceeded to Emcoy Favored College, Ogba, where it thrilled the students with talks of career and scholarship prospects especially for those intending to travel abroad. The career talk was led by Mr Adeoya who is also an executive Consultant to AICL while the Scholarship Workshop was facilitated by the company's CEO, and assisted by Mr Sampson.

The team also visited Maryland Comprehensive Secondary School in Maryland, Lagos on 25th November in continuation of the Workshop tour where it held with over 300 senior secondary students who expressed thrills and ask a lot of questions relating to their careers.

Commenting on the events, AICL's Project Director, Mr Tennyson Sampson said "The workshop has so far helped students understand their career prospects better and the scholarship opportunities available to them if they want to study abroad.”

Sampson said it was a thrilling experience and privilege having to address a great number of secondary school students from various public and private schools in Lagos, as according to him, "the students were very delighted at such a great prospect".

AICL Education is a Lagos based international consulting outfit with over 13 years’ experience in students' counselling on educational programs, and has an excellent track record of preparing and guiding students through their admission application and VISA processes.

AICL is specialized in counselling students interested in studying in the UK, USA, Canada and Australia. The outfit has assisted over 500 Nigerian students in seeking and getting overseas admission and VISA.