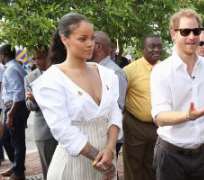 The pair have taken the tests in Bridgetown on the island of Barbados as his tour of the Commonwealth island comes to a close.

Rihanna joked that the test was ‘so easy’ after Harry warned her it would be painful and winced when his blood was taken.

Both Rihanna and the prince tested negative after waiting 20 minutes at the HIV drop-in centre which targets men.

While talking to local people about HIV, Harry said: 'We are all sexual beings…It is also normalising testing – it is the responsible, cool thing to do to know your status.'

He added that while the 'birds and the bees conversation’ happened in Britain, ‘HIV is not part of that'.

Flattering superstar Rihanna, he told her she had 'such an incredible reach' and was 'so respected'.

Harry, 32, persuaded the 28-year-old Bajan superstar to take the test in public with him today when the pair chatted backstage for 15 minutes last night after the prince delivered a speech at a concert to celebrate Barbados’ 50th anniversary.

It was the second time that Harry had taken a test in public in five months in an attempt to reduce the stigma surrounding the virus.

The prince had teased the singer that the test would be painful and winced as the needle went into his finger.

Seconds later, Rihanna proved that she was tougher than the prince, saying: ‘You made it seem like it hurts.

‘It’s not as painful as you said this morning.’

Speaking after the test, Rihanna said: ‘I am very positive about what you are doing here.’

The singer, born and raised in Barbados, turned up in a Jeep she drove herself and was not noticed until a few minutes after she arrived. While they waited for their results, the pair spent 20 minutes touring stalls set up in aid of the campaign