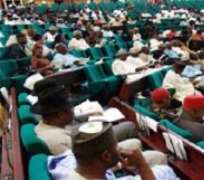 A bill on the eligibility of an acting President or Governor for two terms of office passed second reading at the House of Representatives on Wednesday.

The constitution amendment bill addresses a situation whereby the Vice-President or the Deputy Governor of a state takes over the office as acting President or acting Governor in the event of the death of the President/Governor, resignation, impeachment or permanent disability.

It provides that where the acting president or governor holds the office in that capacity for more than two years, he shall only be entitled to a single term of four years in the event of an election and not two terms of eight years.

The bill was sponsored by the Deputy Speaker of the House, Mr. Yussuff Lasun, who doubles as the Chairman, House Ad Hoc Committee on Review of the 1999 Constitution.

It added, 'The aim of the bill, which has scaled the first reading on the floor of the House, is to give constitutional protection to the two-term tradition.

'By virtue of the combined provisions of Sections 137(1)(b) and 182(1)(b) of the constitution, the President of Nigeria and the governor of a state shall serve in those capacities for a maximum period of eight years.

'However, the constitution equally envisages circumstances where a person can be chosen to act as President or governor.

'These include when the President or a governor resigns, dies or is impeached. If the bill is passed, when a person is chosen to act as president or governor of a state and the person serves for more than two years in a four-year term, that person shall only be eligible to contest election to the same office only once.'

The PUNCH learnt that the bill was introduced to prevent a repeat of the scenario, which played out in 2015 when former President Goodluck Jonathan, sought re-election for a second term after completing the first term of the late President Musa Ya'Ardua and had another term of four years from 2011 to 2015.

Besides the issue of eligibility to contest elections, Lasun's bill seeks to 'compel' the President to attach portfolios to ministerial nominees before forwarding their names to the Senate for screening.

At the state level, governors are to attach portfolios to nominees for the post of commissioners to the state Houses of Assembly.

In a separate amendment bill, which also passed second reading, the House proposed to transfer the power of appointing the chairmen and members of gubernatorial, National Assembly and state Houses of Assembly tribunals to the Chief Justice of Nigeria.

The bill was jointly sponsored by Mr. James Faleke and Mr. Sunday Karimi.

Both bills were referred to Lasun's constitution review committee for further deliberations by the Speaker, Mr. Yakubu Dogara.

They passed second reading in a unanimous voice vote