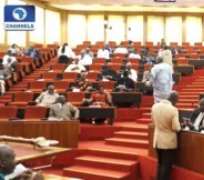 The Senate has approved the request for virement of funds in the 2016 budget by President Muhammadu Buhari.

In banking and finance, virement is an administrative transfer of funds from one part of a budget to another.

The Senate gave the approval during the plenary on Tuesday.

While the President requested for the virement of N180.8bn from the funds appropriated for Special Intervention (Capital and Recurrent), the House of Representatives, which is concurrently working on the request, had raised it to N208bn, while the Senate jacked it up to N213bn.

The virement is to fund critical recurrent and capital items in the budget, according to Buhari in his letter to both chambers of the National Assembly.

Buhari had in his letter to both chambers of the National Assembly, requested for a transfer of N180.8bn out of the N500bn already appropriated for social intervention programme.

The President said this was due to the shortfalls in provisions for personnel costs, inadequate provision for the amnesty programme, continued requirements to sustain the war against insurgency and the depreciation of the naira.

While Buhari requested for the virement of N180.8bn from the funds appropriated for Special Intervention (Capital and Recurrent), the House of Representatives, which is concurrently working on the request, had raised it to N208bn, while the Senate had  increased  it to N213bn.

The committee said, 'In the course of the interaction with the MDAs, the committee observed that there were other areas of critical needs that were capable of stimulating the economy, which additional funds can still be provided with money vired from the Special Intervention Programme.'

The Senate however approved an additional N5bn for the payment of local contractors in the implementation of the Sustainable Development Goals under the Ministry of Housing.

This is even as the Senate jerked up the virement request of N180 billion by N34 billion, thereby bringing the total to N214 billion.

He said virement in its entirety is unconstitutional. He spoke when the Upper Chamber was considering the report of its Committee on Appropriations on the virement of funds appropriated for special investment (recurrent) and special intervention (capital) for funding of critical recurrent and capital items in the 2016 Appropriation Bill.

Ekweremadu cited Section 81(4) of the 1999 Constitution (as amended), noting that this portion of the law allows the President to submit a supplementary appropriation to the National Assembly in case of shortfall in the budget.

According to him, Appropriation Act and Supplementary Act are provided for in the Constitution, but virement has no place in the nation's highest law book.

Ekweremadu implored the Senate and indeed all those piloting the affairs of the state to correct this anomaly and stick only to constitutional provisions.

'I want to call the attention of this Senate to Section 81 subsection 4 just for our guidance and for the future. Section 81 (4) of the Constitution says, 'In respect of any financial year, it is found that the amount appropriated by the appropriation Act for any purpose is insufficient or the need has arisen for expenditure for a purpose for which no amount has been appropriated by the Act, a supplementary estimate showing the sums required shall be laid before each House of the National Assembly and the needs of any such expenditure shall be included in a supplementary appropriation bill.

However, Senator Abdullahi Adamu, drew the attention of the Senate to the fact that Section 24 of the Fiscal Responsibility Act (FRA) provides for virement, stressing that FRA is also part of the laws by which with the country is governed.

Senator Adamu said, 'nobody in his senses will doubt or contest the very clear provisions of the Constitution with respect to budgetary appropriations.

However, there is Section 24 in the FRA which provides for virement. While we accept the intervention, we don't want to create the impression to have meant a wrong thing in totality because there is a fiscal responsibilty act which is recognised by the constitution'.

Reacting to the constitutional question raised by Ekweremadu, Senate President Bukola Saraki, appreciated the clarification, saying that what the Senate was doing was to help the executive in tackling the economic problem in the country.

His words: 'I think your observation as far as the Constitution is concerned is well noted. I think we are all fully aware of that and that is why I continue to thank my colleagues so much in the way we have been addressing the issue of the economy and we are not looking at it from whichever party we belong.'