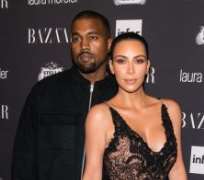 As  Kanye West  remains under heavy medical supervision, his wife Kim Kardashian West remains a constant presence by his bedside.

“The kids have not visited. Kim has been there,” a source close to the situation tells PEOPLE. Resnick Neuropsychiatric Hospital at UCLA, where West is being treated, allows children to visit with adult accompaniment and patient permission.

Though supportive, a Kardashian family insider says that the episode has left Kim, 36, feeling “overwhelmed” and concerned about West's relationship with their children, North, 3, and Saint, 11 months.

“She is very worried about the kids being around Kanye,” another source close to the family tells PEOPLE.

Kim Kardashian ‘Very Worried About the Kids Being Around Kanye’ in Hospital: Sources

As Kanye West remains under heavy medical supervision, his wife Kim Kardashian West remains a constant presence by his bedside

West, 39, was hospitalized for exhaustion and sleep deprivation shortly after he canceled the remaining dates of his Saint Pablo tour last Monday, and remained there over the Thanksgiving holiday .

“The only person Kanye trusts is Kim,” a source previously told PEOPLE . “Kim does spend hours with Kanye every day. She says that Kanye is on many different medications and that his doctors are figuring out proper doses. Kim says that not much has changed since he was admitted and that his doctors seem concerned.”

An additional source elaborated that West generally has “big ups and big downs, but this bout seems to be much more serious. In the hospital he has been very paranoid and is under constant watch for his safety.”

However, a source close to West told PEOPLE  that a recent update was a positive one. “They tell me he's doing good,” the source said, adding that “he's been really eager to make music and to work even from the hospital bed.”

In regard to questions about the rapper's mental state, the West source said that his mental health is “very private,” and “between him and his family.”