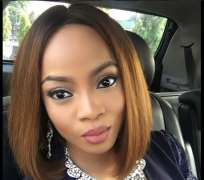 Toke Makinwa in her new book titled 'On Becoming' spilled the bean on how she spoke of the inadequacies of her ex, Maje Ayida and how she contemplated suicide, finding God, bleaching and more.

In the book Toke talked about her 18-month-old marriage which was started on the 15 January 2014 at a private wedding ceremony with Maje Ayida her lover for eight years and how the marriage crumbled.

The Other Woman
'Who was that girl?' I asked
'That's that girl'
'Which girl?'
'The girl I told you about. Her friends are always calling me to say she really likes me and has a crush on me. Her name is Anita.'

'So that's the Anita girl they say you are dating.'

'I'm not dating her. How can I date someone that is always saying 'can I come and see you? I'll bring my friend that you think is cute'?'

'I accepted Maje's explanation and concluded that Anita was not important . So I'll be with Maje and she'd call and I'd tell him, 'The girl that has a crush on you is calling.' And it would be nothing.'

In chapter 8 'On Becoming' titled 'Hurt'. Toke wrote about Maje returning from a trip and infecting her with an STI.

And she said 'He had given me an STI in the past. He'd returned from a trip once and we had sex, and a few days later I was itching.

'I went to the doctors and they prescribed medication, but when I asked Maje about the infection he denied knowing anything about it. I went through hisPHONE and saw a conversation with Anita where she complained that she had been itching.

According to her, it was not news to Maje, more like an update that she was giving him on a situation that he already knew about.

'He asked what the doctor's report said and what was prescribed. I knew I would be putting myself at risk if I closed my eyes to whatever he chose to do on the side. So I went back to putting all my attention into my work.'