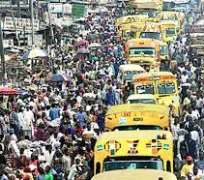 At least three of every 10 years spent in Lagos is lost to traffic, a survey by a Lagos-based transport firm, Planet Projects, has shown.

It, therefore, means that residents of Lagos, Nigeria's economic capital, spend an average of seven hours 20 minutes in traffic every day.

The Managing Director, Planet Projects, Mr. Biodun Otunola, who spoke on the issue at a press briefing in Lagos on Saturday, said 70 per cent of the city's traffic bottlenecks could be located on road junctions.

He said this was taking a heavy toll on the health of the road users, reducing their lifespan and adversely affecting their productivity as well as the economy of the nation.

'Driving to work daily and being stuck in traffic for hours causes fatigue, leads to low productivity and burning of fuel. Unless we solve the traffic problem, and by extension the transport problem, we'll continue to kill ourselves,' he said.

Otunola, whose firm is organising a three-day conference on the challenges and opportunities in the Nigerian railway from today (Monday), said there was an urgent need to reduce car ridership in Lagos by 20 per cent.

For instance, he said the Lekki-Epe Expressway, which was initially designed to move an average of 7,000 vehicles, now had to contend with about 70,000 automobiles.

He also stressed that there was no need to build new roads in Lagos, adding that what was required was to work on the existing ones, remove some junctions and focus on effective public transportation.

According to him, economic development and improvement in standard of living may not be achieved unless necessary steps are taken to tackle the challenges in the transportation sector.

Disclosing that the firm had concluded plans to host an international conference on railway themed: 'Nigeria railway industry moving from 19 to 21 century: Challenges and opportunities', he said it would address key issues in the industry.