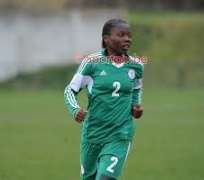 Eighteen-year-old Falconets defender, Mary Ologbosere has been referred to the traumatic unit of a hospital in Abuja after she suffered from depression following the inability of the Nigeria Football Federation (NFF) to pay the players what was due to them, after they arrived from the U-20 World Cup in Papua New Guinea.

The defender who lost her father while the Falconets were at the World Cup said the entire family were depending on her to return form the game so they could bury their dad.

However, after their return from the World Cup Wednesday afternoon, they were all shocked to have received a miserly N10,000  and instructed to return to their homes.

A shocked Ologbosere cried all through the night and had to be rushed to the hospital as a result, where she is now receiving treatment at the traumatic unit.

A team official at the Serob Legacy Hotel where the football players were lodged said: 'She is totally shattered by this heartless treatment,' It's truly a pathetic case'.

The N10,000 paid to each player is reportedly, the only money they received from the NFF since they opened training camp for the World Cup earlier this year.

The team vowed not to leave the hotel they were booked into until they receive the correct amount due to them. - Daily Times.