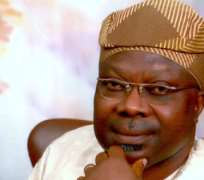 A faction of the Peoples Democratic Party (PDP) in Osun State has suspended a former Deputy Governor of the state, Senator Iyiola Omisore for allegedly engaging in anti-party activities.

This suspension of Omisore and other PDP chieftains is contained in a statement issued on Friday and signed by Chairman,  Mr. Soji Adagunodo and the Secretary, Mr. Bola Ajao.

Apart from Omisore, the Adagunodo-led executive also suspended the chairman of the other faction of the party, Dr. Bayo Faforiji;  Bunmi Jenyo;  Chief Ojo Williams and  Bade Falade for the same offence.

'In accordance with the provisions of the PDP constitution,  and inherent powers vested on the the State executive committee of the party,  the said individuals are hereby suspended as recommended.'

The Adagunodo-led faction said Omisore should go and clear his name with the Economic and Financial Crimes Commission before seeking to participate in the affairs of party.

Although Omisore could not be reached at the time of this report, one of his allies told our correspondent that the suspension was a joke.

But a faction of the PDP loyal to Omisore had on Thursday expelled the national secretary of the PDP, Prof. Wale Oladipo and Adagunodo.

Faforiji alleged that the expelled PDP leaders were involved in instituting the suit which nearly prevented the PDP governorship candidate in Ondo State, Eyitayo Jegede from participating in the election.