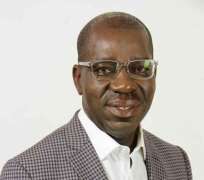 Edo State Government Thursday announced the sack of Major Lawrence Loye (Retd), from office as Permanent Secretary in the Public Service of the State with immediate effect.

His sack was contained in a statement issued and signed by the Secretary to the State Government, Osarodion Ogie Esq.

The statement reads in part: 'I write to inform you that His Excellency, the Governor has approved your removal from office as Permanent Secretary in the Public Service of the State with immediate effect.'

He was also ordered to hand over all government properties in his possession to the most senior director in his ministry.

No reason was however given for his sack in the statement.

Until his removal, Major Loye who hailed from Ilesa, Osun State, was the Permanent Secretary in the State Ministry of Transport.

It would be recalled that Major Loye came into the limelight few years ago when as the head of the task force on the demolition of illegal structures in Edo state, was handcuffed and thrown into a van for allegedly ordering the demolition of a building belonging to the wife of two-time governor of the defunct Bendel State, Dr. Samuel Ogbemudia by former Governor Adams Oshiomhole.