We've Instituted Most Transparent System In Allocation Of Resources—Aregbesola 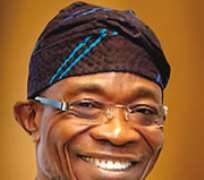 The Governor of Osun, Ogbeni Rauf Aregbesola, has said that Osun government under his leadership has instituted the most transparent financial system in the allocation of resources accruing to the state.

Aregbesola stated this when the management team of Rave FM 91.7, Osogbo, came to intimate the governor on the activities lined up for the celebration of one year anniversary of the radio station.

He said that Osun has exhibited one of the utmost transparency in its financial system in the disbursement of its resources.

According to him, it is on good record that Osun pioneered the constitution of a committee saddled with the responsibility of assisting the state government in the allocation of state revenue to ensure prompt payment of salaries as well as adequate running of government.

"In our attempt to ensure transparency in our financial dealings, we inaugurated a committee headed by a veteran Labour leader in person of Comrade Hassan Sunmonu.

"Other members included the chairman of Nigeria Labour Congress in Osun; Chairman of Joint Negotiating Council, Chairman of Osun's Nigerian Union of Teachers and government representatives, who are not political appointees," Aregbesola said.

He stated that the committee was aware of how the bailout funds was disbursed and so there is no way his government could have diverted or fixed the bailout as reported by some of the media organisations.

"I cannot be found wanting whether in bailout funds or other funds of Osun as we have been creative in the management of the scarce resources to lift the state beyond the limit of the available resources.

"I must also let you know that there is no way we could have diverted the funds, knowing that it was not sufficient for our needs in the first place.

"And this is why Osun has been able to pay its workers till August this year. There is no case of diversion of bailout loan as far as Osun is concerned.

“ The bailout was to take care of salaries backlog up till June last year. If anything, the Osun government had demonstrated enough transparency by ensuring that the bailout loan was disbursed with adequate supervision of a committee of labour and government.

"Despite the meager allocations coming from the Federal Government, Osun still pays salary. And nobody bothers to ask how we have been consistent in the payment of modulated salary of about N1.7 bn when the state even once collected as low as N6 million one time.

"I want to also assure you, contrary to the insinuation being made by our traducers, who claimed we diverted the bailout funds, that nothing of such happened. This is the concoction of a mischievous opposition and their media conspirators," Aregbesola said.

The governor further said that his administration has come clean of any act of misappropriation thorough layers of safety net in financial transactions.

He disclosed that in addition to the oversight work of Sunmonu-led committee, government equally put labour union working in the bank on a red alert to inform it's leaders of any underhand transaction and transfer of fund from the bailout account in the bank.

He continued: "So as to ensure utmost transparency in the disbursement of the bailout fund, we also told labour members working in the bank to watch over the account and report any strange transfer of the fund into any other account.

"Up till today, I have not received any report of such transfer by the labour. At least, the labour leader has not told me anything."

He commended the station for its objectivity unlike some sections of the media which thrive on sensationalism instead of objective reportage and investigative journalism.

Aregbesola said false reports portend great danger if what a media house only knows how to do is to concoct falsehood and publish it as news story.

Aregbesola said an accusation as weighty as diversion of bailout funds without proper investigation and concrete evidence to back such allegation simply amounts to recklessness in the exercise of freedom of expression.