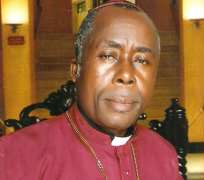 Obiaruku: The hardship and present recession facing Nigeria has been attributed to past and present religious and leadership problems that had bedevilled the country for a very long time.

This statement was made recently by Bishop Greatman Nmalagu, the Executive Assistant to the Delta State Governor, Senator (Dr) Ifeanyi Okowa on Religious Matters in a message on Sunday, 20 November calling on the two Chambers of the National Assembly to deliver Nigeria. The message which was titled “National House of Assembly, Deliver Nigeria from Danger-Knowing Fully Well you will also be Affected”, focussed on food, increase in local fuel pump price and the rumoured sharia law being debated in the National Assembly.

According to the statement, the present economic recession is from previous and present problems created by religious and leadership maladies.

“The recession Nigeria and all her inhabitants are facing today is sequel to previous and present problems created by religious and leadership maladies in the nation”.

Bishop Nmalagu said the trend of illness caused by religious beliefs and leadership problems are causes of recession and lingering crises shipwrecking virtually every sector of the country. As he puts it.

“No matter the kind of defence anybody or group of people will put as the things that led to the formation of Boko Haram bedevilling the North East, it is quite clear, boko Haram was formed and run on the premise of religious teaching, properly received and misunderstood by the sponsors and members”.

According to him, this wrong teaching has taking away the lives of innocent Nigerians, destroying properties, creating confusions amongst the army and civil societies across the nation.

He said that despite the religious and leadership problem, with proper legislation from both houses, on formidable laws, the nation can be saved.

“Speakers, Chairmen of committees of both chambers of the National Assembly must make formidable efforts now by taking urgent steps legislatively to eradicate the causes of the recession, so as to deliver Nigeria from danger of divisions and chaos in 2017”.

Continuing, he stated that causes of problems in the country, especially for the recession, can be attributed primarily to increase in local pump price of fuel, sharp banning of some essential commodities and the national threats by the terrorists and militants across the nation.

Bishop Nmalagu pointed out that increase in local fuel, and banning of the essential commodities, increase in transport fares, had caused serious hardship in the country, and families are now finding it extremely hard to take care of their needs.

Because of the hydra formatted problems these issues had already created, there is an urgent need for the national assembly to arrest the tide, which may even result to another issue of increase in rent of houses as the year, 2016 comes to an end, further worsening the situation, and they as legislatures will also be affected, and they should not wait until it gets worse before they act.

On the reported Sharia Bill for the Islamic laws to be included in the nation’s constitution, he called on them to ensure such law will not enter the Nigerian constitution, as it will breed more agitations by other religious bodies in the country.

“If such movements succeed, a very strong opposition will be witnessed across the states and similar request will surely generate more problems on the leadership and Nigeria as a nation”. He said.

Bishop Nmalagu in the statement asks the legislatures to make good laws, carryout their oversight functions to ensure the three problem of food, increase in pump price of local fuel, the purported sharia law that is being smuggled into the nations constitution are critically examine to save and rescue Nigeria from the present recession.