Soyinka in the splendour of an India palace 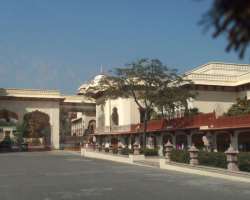 AT the Jaipur Literary Festival held this past January 21 to 25, Wole Soyinka wowed the crowd with his voice, earning a remarkable headline in a national daily: 'Soyinka casts a spell over Jaipur!' The Nobel laureate was practically mobbed by young Indian literary enthusiasts who desperately wanted his autograph.

However, the design sleuth, warped mind and all, was more interested in Soyinka's place of abode for the period.

Beyond envious headlines and wild mobs asking for his autograph, what does it feel like being a Nobel laureate?

What sort of hotel is worthy of his status when being hosted by the self-styled biggest literary event on earth.

Yes it is, quite literally, in every sense, a princely place to stay at.

A former home of the Maharaja (king) of Jaipur, converted to a palace from a guest house and hunting lodge to his taste in 1925, the edifice stands as a worthy example of successful adaptive re-use and impressive conservation of a historical monument, a trend which has caught on in Jaipur and other parts of India.

The architects Amit and Shalini Gehlot were commissioned by the Royal Family in 1999 to renovate the palace, which had already been converted into a luxury hotel in 1957 before being taken over by the Taj group in 1972.

The architects were given the project on condition that they approached the project with deep reverence for the cultural and historical relevance of the site, as if they didn't have their work cut out for them already, having to introduce elevators, air-conditioning, hotel reception and other perks that would be expected of a modern luxury hotel.

The palace's generous acreage of lush lawns came in handy though, providing extensive ready-made gardens for the new hotel.
The local paper DNA.Sunday also reports that the duo had to recreate an Italian carpet for the floors from what the royal family could remember about the original and other items of furniture and other decorative elements had to be recreated from photographs of the originals that survived.

“In fact, the Indian influence in the palace was limited and we had to be honest to its colonial flavour and architecture,” DNA quoted Amit Gehlot as saying in response to the notion that the main challenge they had was in reflecting the Indian heritage of the old building.
“The royals were widely influenced by their travels abroad and this was reflected everywhere – in the architecture, artifacts and furnishings.”

INDIAN architecture' interestingly is almost as vague a term as 'Nigerian architecture', India is made up of such diverse cultures that have in turn been influenced by several foreign influences over the centuries that it is nigh impossible to articulate a particular style that is purely Indian.

However, the Rambagh Palace hotel makes good use of ornamentation and tasteful décor in delivering a super luxury hotel. The ceiling of the main banquet hall is said to have been hand-painted in exquisite detail by Italian prisoners from the Second World War.

The architects had to closely monitor the recreation and renovation of these and many other details. The doors opening out from the reception lounge into the inner courtyards are not mere doors, they are carefully sculpted with the lintels housing them following each turn with amazing precision. And then you have richly liveried attendants at every corner you turn, manning each door and staying within range, bowing in greeting even when you head into the rest room. Splendour redefined.

THE authors of the quirky book of trivia — Superfreakonomics — offer that for no clear reason, Nobel Prize winners tended to live longer than their peers who merely got nominated or were just as good but never got nominated. With his luxurious white mane and rich sonorous voice that bewitched the audience at the Jaipur Literary Festival, little wonder that Wole Soyinka remains such a sprightly septuagenarian despite having spent so many months in solitary confinement during the Nigerian civil war and despite the appalling politics that still draws his ire from his home country, propelling him just recently to lead others on a protest march to the nation's capital.

If you are housed at places like the Rambagh hotel from time to time, you sure will live to survive all that.

With that deduction in mind as I walked down the steps of the super luxury hotel and waited while they called for my cab, I felt once again, like a Maharajah.