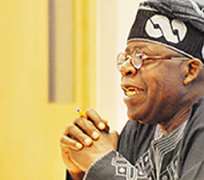 By Samuel Ajayi
If you are a poor reader of the nation's political barometer, you might be forgiven if you believed yesterday's APC mega rally in Akure, the Ondo State capital, was to garner votes for Rotimi Akeredolu, the party's flagbearer for Saturday's governorship election in the state. No. It was not. I arrived Ado-Ekiti on Thursday night and when I heard that Buhari would be attending the rally, I knew a bold political statement would be made and strong message sent to the Tinubu camp. I listened to beer parlour gossips in my hotel, sample opinions and I concluded that the bridge would be burnt during the rally. I was not disappointed.

My anger with many Tinubu followers is that we, particularly my humble self, saw this coming. I wrote about it on this platform and I told many followers of the former Lagos State governor that he would be used and dumped but they said that was not possible. In fact, one of them gleefully told me that he had been given ten ministerial slots. He told me: 'Have you forgotten he nominated the VP?'

I don't know if Buhari attended the mega rally in Edo but I knew he did not attend the one at Kogi. Attending the Ondo rally was meant to achieve the following:

• Buhari has used the rally to tell the whole world that he supported all the things his foot soldiers did to ensure that Akeredolu won the primaries.

• He endorses all the subtle and direct attacks on Tinubu by his foot soldiers.

• He aligns with the position of John Oyegun, the party chair, on the handling of the party's affairs.

• He also attended the rally to also inform you and I that he was not unaware of the orchestrated crisis in PDP camp.

• He also used the rally to stamp the underground message that APC can win election in the South-west with or without Tinubu.

• Personally attending the rally, Buhari has finally told Tinubu that he was ready to groom new pointsmen in the South-west who will give him a run for his (Tinubu's) money.

Let me give Tinubu's followers one piece of bad news. As it stands, Akeredolu would win on Saturday. Not because he is popular, but because those who wanted him to win did and are still doing their homework very well. The issue of who is the authentic candidate of the PDP might not be resolved before Saturday . Jimoh Ibrahim is part of the whole plan and Tinubu is still the target: he must be demystified.

Has it served Tinubu well? Yes. On this platform, I have written several times that there were key Yoruba people who truly wanted genuine change the way the affairs of this country were being run. But the idea of change to core Buhari fanatics in the North was within ethnic and religious contexts. They simply wanted power to 'change' to the North and from a Christian to a Muslim. It was as simple as that. Their own change was different from those of South-west herds who were shouting Sai Buhari. And unfortunately, they found in my people, willing tools who helped sell a product that has been rejected since 2003.

The popping up of the Buhari brand was done 95% by the Yorubas. We 'recreated him'. We rebranded him. We garbed him in borrowed robes. We put it on our heads and carried on as if the future of our unborn generation depended on it. Those who did not join the bandwagon were called names. I learnt authoritatively that most of the lies told to sell Buhari then were generated by some Yoruba guys and used the social media to circulate them.

And to Fayemi and Fashola, I pity your late parents. The banana peel is still very much on the political floor. Enjoy the influence and revel on the new status of being Tinubu's nemesis.

But  know one thing: the grass always turns brown when the rain stops…