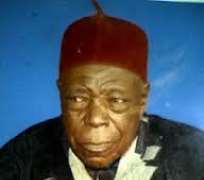 The Chief Imam of Borno, Imam laisu Ibrahim Ahmed has advocated for preaching of same ideologies among different denominations in Islam, as according to him, diversification of ideologies practiced among Sunni, Izala, Tijjaniya, Kadiriya, Shi'ite and other religious groups were some of the problem affecting peaceful co-existence among comity of nations.

He stated this in Maiduguri when members of Kano Coalition of Ulamas, led by Engineer Mallam Bashir Aliyu and Committee of 'Nigerians United For Sustainable Action on Internally Displaced' (NUSAID), paid him a sympathy visit over activities of insurgents that have claimed many lives with millions of people displaced from their homes.

Imam Ahmed advised that, for peace and unity to prevail among diverse denominations in Islam, there should be a common and ecceptable ideologies as contained in the Holy Qur'an.

He acknowledged the coming together of Kano Coalition of Ulamas, comprising of Tijjaniya, Izala, Shi'ite, Kadiriya, Sunni and other groups for teaming up collectively to visit various Internally Displaced Persons (IDPs) camps including those living at Christian Association of Nigeria (CAN Centre) in Jerusalem, Maiduguri to distribute relief items donated by concerned Kano Indegines.

"I want to thank Allah for granting you safe journey to Maiduguri, We are indeed very grateful for all of you who are from different denominations come to terms and visited our IDPs by distributing relief items, such as bags of rice, clothing materials among others donated by Concerned Kano People including your Emir, His Royal Highness, Alhaji Sanusi Lamido Sanusi.

"We in Borno will remain ever grateful to Kano people because these items were distributed not only to Muslim IDPs, but it was extended to our Christian brothers who were taking refuge at CAN/EYN centre in Maiduguri Metropolis. This is highly commendable, you didn't segregate in the distribution exercise, as I learnt that both several Muslims and Christians who were victims of boko haram benefited from the gesture". The Scholar said.

In his remarks, the Leader of the delegation, Mallam Bashir Aliyu told the Chief Imam that the Committee who had spent a week in Maiduguri, visited Bakassi Camp, Dalori II, Borno Rehabilitation Centre, CAN Centre, Indimi Mosque, other resettlement areas and distributed 25,260 packaged bags of rice, Spaghetti, Garri, Action Meal and 73,680 clothing materials among other items.