IFAD signs US$25.5 million agreement to revitalize irrigation for drought-hit farmers in Zimbabwe 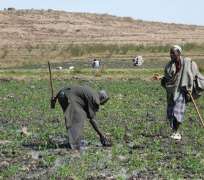 Rome, 18 November 2016 – The International Fund for Agricultural Development (IFAD) and the Government of Zimbabwe signed a US$25.5 million agreement today to revitalize 6,100 hectares in 152 existing smallholder irrigation schemes in the semi-arid zones in four provinces: Manicaland, Masvingo, Matabeleland South and Midlands. Over 27,700 poor rural households will benefit from this programme.

The agreement was signed in Rome by Patrick Chinamasa, Minister for Finance and Economic Development of Zimbabwe and Kanayo F. Nwanze, President of IFAD.

The Smallholder Irrigation Revitalization Programme (SIRP) will cover some 46 per cent of the country’s estimated total irrigation-equipped area of about 13,000 hectares. The total cost of the project is US$51.3 million, including $15 million from the OPEC Fund for International Development, $7.9 million from the Government of Zimbabwe and $3.2 million from the beneficiaries themselves.

Zimbabwe’s current drought and food security issues have remained dire over the past decade, exposing millions of people to food insecurity and poverty despite the fact that Zimbabwe has one of the highest proportion of irrigated land in the region. Evidence shows that households in smallholder irrigation schemes are better off in terms of food production, income, nutrition and general well-being than those relying on rainfed agriculture.

“Decades of experience in irrigation development, both in Zimbabwe and elsewhere, has shown that there is need for an integrated approach to ensure commercial varieties and climate resilience,” said Thomas Rath, IFAD Country Programme Manager for Zimbabwe. “This is why SIRP is designed to help drought-hit smallholder farmers to improve access to markets and fertilizers and adopt climate-smart agricultural practices to boost productivity so that they can generate sufficient revenues to defray the costs of operating and maintaining irrigation schemes.”

SIRP will improve productivity and climate resilient crop production under both rainfed and irrigated conditions, through diversification of crops and increased adoption of improved varieties, combined with climate-smart agricultural practices and most importantly, enhanced access to markets. In addition, the project will improve the management of natural resources at the village level, including soil and water conservation in the catchment areas adjacent to the irrigation schemes.

In short, the programme will allow rural households in the target districts to achieve food and nutrition security and become resilient to the effects of climate change and economic shocks.

Since 1980, IFAD has financed six rural development programmes and projects in Zimbabwe, for a total amount of $266.9 million with IFAD investment of $95.6 benefiting directly 1,168,000 rural households.