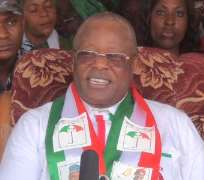 The attention of the good people of Ebonyi State, from all backgrounds, affiliations and orientations, are drawn to the frivolous and baseless story circulating within society in respect of the status of the court processes that have since been disposed and rested by various levels of legal adjudication in this country concerning the resounding election of the Governor of Ebonyi State, His Excellency, Engr David Nweze Umahi.

It has become imperative to provide all patriots with an accurate, verifiable and indisputable information and to allay any anxieties that may have been unnecessarily induced by rumour mongers and peddlers of worthless speculations.

Let it be categorically stated that there is no election litigation either in the regular courts or in the tribunals against the election of the incumbent Governor of Ebonyi State. There does not exist anywhere in the Nigerian federation, at any level of the judicial process â€“ be it in the conventional courts, the customary courts or the Sharia courts, any form of challenge against the thunderous victory secured by Governor Umahi in the 2015 gubernatorial election in Ebonyi State. All such matters, where they existed, have been decisively and unequivocally ruled in favour of the Governor and rumour mongering or wishful thinking cannot alter that irreversible fact.

The mischief makers are simply dedicated to the negative preoccupation of attempting to distract the Governor. But he remains resolute, focused, dedicated and unshakable in his determination to reconstruct our society, to deepen and widen the depth and scope of development in Ebonyi State.

His Excellency remains ceaseless in his expression of gratitude to the honourable people of this great state for their support, their cooperation, their fervent prayers, their solidarity and cooperation. He urges us all to remain faithful in this disposition and march forward together as brothers and sisters for the elevation of our collective interests and our state.