Tougher times ahead for Nigerians as oil, gas revenue plunges by 17% 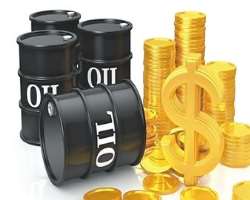 Funding of the 2016 budget may suffer a further setback, as the country, recorded yet another sharp drop in its oil and gas export from $212.25 million in July to $180.93 million in August, representing 17 percent drops in proceeds.

The worrisome news in the country's oil, gas revenue profile is contained in the latest group financial report for the month of August, released by the Nigerian National Petroleum Corporation (NNPC) recently.

This shortfall observes believe was an indication that funding of critical components of the 2016 budget may not really be quite effective within the year implying tougher days ahead for average Nigerians.

A breakdown of the report showed that contribution from crude oil amounted to $120.84 million while gas and other proceeds was $60.09 million. According to the report, out of the total receipt, the sum of $157.05 million and $23.88 million were remitted to fund Joint Venture (JV) cash call and federation account respectively. But the report attracted government performance in report proceeds to attack and sabotage of oil exploration and exports by militants in the Niger Delta.

Specifically, the financial statement revealed that JV cash call funding slumped from $168,129,620 in July to $157,046,660 in August, representing a decrease of 7 percent

On why it recorded low export proceeds, the corporation said the poor performance was attributable to attack and sabotage of oil facilities in the Niger Delta.

'At Forcados Terminal alone, about 300,000 barrels per day (bpd) were shut in since February 2016, following Force majeure declared by Shell Petroleum Development Corporation(SPDC). A number of crude oil liftings were equally deferred until the repair were completed.

The stated Corporation further that total export for crude oil and gas receipt for the period of September 2015 to August, stood at $3.21 billion out of which the sum of $3.09 billion was transferred to JV Cash Call in line with 2015/2016 approved budget and the balance of $0.073 billion paid to Federation Account.

However, NNPC stated that, this amount falls short of the calendarised appropriated amount of $615.80 million and $712.46 million for 2015 and 2016 respectively due to worsening production and fall in crude oil price.

Though, the Minister of State for Petroleum Resources, Mr. Ibe Kachikwu, had recently said that, the Federal Government had reached an 'outline settlement' worth $5 billion with five International Oil Companies (IOCs) to cover outstanding payments for joint exploration and production.

Kachikwu, disclosed that the payments would be made in the form of new oil production, adding that there would also be a one-off cash payment.

The agreement would hopefully be finalised by the end of the year and cover the period from 2010 to 2015.

The delay in payments has hindered oil and gas investment and worsened a budget crisis as the government seeks to increase spending to get economy out of recession.

Daily Sun had in May, reported stakeholders' proposal that the corporation slashes the percentage of government equity (usually 60 per cent) in the operations and allow the IOCs and indigenous companies cover exploration and development costs.

This concern is growing as budgetary provision to it from government continues to dwindle due to other  national capital and fiscal demands.

Despite having several joint venture agreements with IOCs, NNPC has consistently been challenged meeting its funding obligation.

Prior to the oil glut, payment of cash calls and requests for payment for anticipated future capital projects sent by JV operators to the government as non-operating partners had always been a challenge, with payments either being partially made or not at all.

As at January 2015, NNPC is indebted to about $5 billion in cash calls to its JV partners.

Further losses indicated that NNPC recorded a total loss of N127.73 billion between January and August this year.

The report for the month of August, however, indicated that the national oil firm reduced its losses to N11.22 billion in the month compared to the N24.18 billion recorded in July.

It further revealed that pipeline vandalism in the country was reducing following the Federal Government and the NNPC's sustained engagements with the Niger Delta militants.

It added that the largest single loss of N76.33 billion came from the corporation's headquarters during the eight-month period, adding that the total loss by the country's refineries during the same period was N48.69 billion.

The report showed that from January to August, the NNPC recorded a total expense of N1.14 trillion, against a total revenue of N1.02 trillion.

On the improvement in August, the corporation explained that it was largely due to the increase in Pipelines and Products Marketing Company's coastal sales and the significant improvement in the Nigerian Petroleum Development Company's revenue for the month.