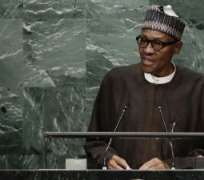 President Muhammadu Buhari will present a detailed request to the National Assembly to borrow $29 billion to finance its 2016 budget.

The President's initial borrowing request was returned by the Senate for lacking details.

A spokesman for President Muhammadu Buhari, Mr Femi Adesina, gave a hint on Sunday about the preparedness of the presidency to represent the document to the Senate on Channels Television's programme, Politics Today.

'You notice that what the Senate said was that it needed more details about that bid for loan. It was not that it rejected it completely.

'If on the basis of that you do not represent, it does not show you as a serious government in the first place.

'This is not a flippant government and before it asked for that kind of loan, it did its homework properly and if the senate says it needs more details that will be provided and represented,' Mr Adesina stated.

On whether there is perceived political undertone to the return of the document to the Executive Arm of government, the president's spokesman said: 'It is not about pride or individuals' interests, but it is about our country. The Presidency is out to serve the people.

'You do not know at any particular time what is motivating that person to speak.

Giving further explanation to what he called under-currents, Mr Adesina said: 'I meant politics. But what should be at play now should be national interest rather than politics.

'I think that politics is coming too much into play rather than the interest of the people'.

He also mentioned that the presidency was planning to forward the 2015 budget to the national assembly soon.

'We are recording better timing as regards the budget and it will come as soon as possible,' he stated.

Earlier on Sunday, a political analyst, Professor Abubakar Momoh, had expressed lack of confidence in the economic team of the current government.

He made the statement considering the current economic recession hitting the nation hard.

But Mr Adesina dismissed the opinion, saying 'Nigeria is going through troubled times and we need level headed people that will lead us through this period'.

On whether the President will rejig his cabinet, as had been recommended by critics, the President's spokesman said that President Buhari's had the prerogative to rejig the cabinet if he felt they were underperforming.