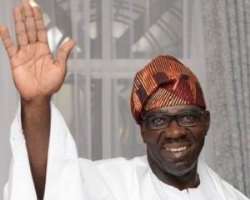 Mr Godwin Obaseki was on Saturday sworn-in as the new governor of Edo state for the next four years at the expiration of the term of office of Adams Oshiomhole.

His Deputy, Mr. Phillip Shuaibu was also sworn-in.
The oath if office was administered by the Chief Judge of Edo state in the presence of top government functionaries, political office holders and politicians.

The ceremony officially puts to an end, the tenure of the incumbent, Mr. Adams Oshiomhole who had been two- term governor spanning eight years.

Obaseki was elected governor on the platform of the All Progressives Congress (APC).

Shortly before the oath was administered, Oshiomhole reviewed the parade mounted by the state police command.

The new governor will run for four years.
He defeated Pastor Ize Iyamu of the People's Democratic Party.

He started with Capital brokers in 1983. After traversing the financial market sector as chief executive in various categories, he joined the government of Oshiomhole.

He is the pioneering and current Chairman of the Edo State Economic and Strategy Team which was inaugurated by Governor Adams Oshiomhole in March 2009.

Phillip Shuaibu is from Jattu in Estako West in Edo state.

He took the oath of office as deputy governor before the governor-elect, Godwin Obaseki.

Chief  Judge of Edo state administered the oath of office.