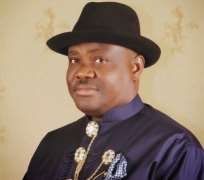 Wike, who spoke during special court session marking the opening of the 2016/2017 Legal Year of the state Judiciary in Port Harcourt, said he was afraid to leave Government House due to fear of being arrested by security operatives.

He stated that there was no respect for people in authority in the nation, pointing out that anybody could be arrested and humiliated at anytime.

The governor expressed concern why judges would be intimidated and arrested like common criminals from their homes at odd hours of the night.

Wike said: 'I was afraid to come out for this programme when I heard that all the security heads in this state came for the programme.

'So, I told my orderly to pack some of my things into a bag that I may not return because they may arrest me from there.

'My orderly asked, but you have immunity, I told him that there couldn't be immunity in Nigeria when people are arrested anyhow. We don't respect the rule of law. Anybody can be arrested at anytime', the governor stated.

Speaking further, Wike faulted the anti-corrupt war of the Federal Government saying, 'The fight against corruption in the country undermines development. It serves no useful purpose'.

He flayed the Nigerian Judicial Council (NJC) and Nigerian Bar Association (NBA) on their decision supporting the stepping down of the embattled judges arrested by operatives of Department of State Security (DSS) on alleged corrupt practices.

Wike lamented that, if the two revered legal bodies knew the implications of their decision, the NJC and NBA would have thought twice.

The governor said it was unfortunate and dangerous because lawyers had played into the hands of politicians, which would later be used against the former.

Earlier in her speech, the Chief Judge of the State, Justice Adama Iyayi-Lamikanra, thanked the governor for his commitment in repositioning the judicial system in the state.

Justice Lamikanra said there has been regular release of funds to the judiciary by the state government even without request, adding that the governor had rescued the judiciary workers from the current economic recession.

She disclosed that the judiciary had remitted N367, 000,000 to the state account in the last legal year.

Lamikanra further confirmed the approval of two Judges by National Judicial Council and they would be sworn in next week Monday. - The Sun.