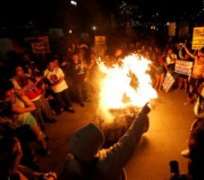 In the wake of Donald Trump's stunning victory in Tuesday's U.S. presidential election, there have been multiple reports of violence and vandalism tied to the inflammatory comments the president-elect made about women, Hispanics and other minorities during his divisive campaign.

• In Philadelphia, graffiti — including swastikas, Trump's name and the message “Sieg Heil 2016” — was found spray-painted on the windows of an abandoned fur store. Police are investigating the incident.

“We are horrified by the appearance of hate graffiti on a storefront in South Philadelphia,” Nancy K. Baron-Baer, regional director of the Anti-Defamation League, said in a statement. “Swastikas and the Nazi salute send a message of intolerance and hate to the entire community.”

Nazi-related Trump graffiti was spotted inside a high school in Minnesota. (WCCO-TV)

• In Minneapolis, the president-elect's name was included in racist graffiti that was scrawled on the door of a high school bathroom.

In an image of the vandalism at Maple Grove Senior High School posted to social media, “Trump Train” was written below “whites only,” “white America” and a vulgar message that included the N word. School officials said they are investigating.

“The tweet you may have seen of a racist message scrawled in a school bathroom is real and we are horrified by it,” a representative for the school district said in a statement . “It goes against everything we stand for, and it is completely contrary to our core values as a district and individual schools. School leaders immediately launched an investigation into the incident, and they will take swift and appropriate action based on the investigation findings.”

Some students told WCCO-TV they are scared to go to school.

“I don't feel comfortable, to be honest,” Atep Ndip said.

• In Detroit, students at a middle school broke into chants of “build the wall” in the cafeteria on Wednesday as Latino children at the school were reportedly crying .

“We addressed this incident when it occurred. We are addressing it today,” Royal Oak Schools superintendent Shawn Lewis-Lakin said in a statement . “We are working with our students to help them understand the impact of their words and actions on others in their school community.”

• In Durham, N.C., the message “Black lives don't matter and neither does your votes” appeared on a wall in the city on Wednesday.

• In San Francisco, a homeowner decided to fly a Nazi flag over his home following Trump's triumph.

According to CBS San Francisco , the owner, Frederick Roeber, a noted physicist and Internet pioneer, was apparently flying it to make a statement against Trump. After he was confronted by an angry neighbor, Roeber removed the flag and replaced it with a rainbow flag in honor of gay pride.

“I had a very visceral reaction. I went across the street as soon as I saw it,” the neighbor, Francine Miller, told KPIX-TV. “I think that there is just general unease right now, with Trump being the president-elect. And I think if you woke up this morning and you're a woman, you're a Jewish person, you're gay, you're a Latino, you're a little on edge. And so I felt really uncomfortable.”

Protests have erupted around the country in response to Trump's election, with thousands of demonstrators taking to the streets in cities such as Atlanta, Chicago, Los Angeles, New York, Oakland, Philadelphia and Portland, Ore., on Wednesday night. While some arrests have been reported, the protests have been largely peaceful.

But there have been scattered reports of vandalism and violence aimed at Trump supporters.

• In Los Angeles, protesters burned a Trump piñata in effigy on Wednesday night.

• In Chicago, police are investigating the beating of a suspected Trump supporter who had stopped in an intersection.

In a video of the incident uploaded to YouTube, the victim, a 50-year-old white man, was pulled from his car by a group of black men, who proceeded to kick and punch him while yelling “you voted Trump” as he tried to get back in the vehicle. One of the assailants appeared to get in the car and drive away as the man held onto a driver's-side window.

According to CBS Chicago, the man was taken to a local hospital and is in good condition, but police have yet to make an arrest in the case.

The Rev. Michael Pfleger, a local activist, condemned the attack.

“This is unacceptable and must be condemned by everybody,” Pfleger said in a statement . “Violence is NEVER an acceptable response. Emotions are raw coming out of this election, but frustration, anger and despair do not give permission to be violent. Let us not surrender to evil, rather rise above it!”

A Donald Trump piñata is burned in Los Angeles on Nov. 9, 2016, by people protesting his election as president. (Photo: Mario Anzuoni/Reuters)