Onnoghen, at inauguration as acting CJN, vows to cleanse judiciary 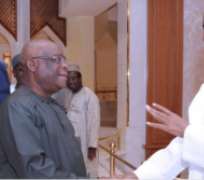 The acting Chief Justice of Nigeria, Justice Walter Onnoghen,  has vowed to continue with the fight against corruption in the judiciary.

Onnoghen was inaugurated in that position on Thursday in Abuja.

His inauguration by President Muhammadu Buhari followed the expiration of the tenure of Justice Mahmud Mohammed as the CJN. The new CJN will serve in an acting capacity till his appointment is confirmed by the National Assembly.

At the brief ceremony held in the Presidential Villa, Abuja, President Buhari urged Justice Onnoghen to use his position to assist the government in tackling the three most identifiable problems of corruption, economy and physical insecurity facing the country.

Buhari noted that Onnoghen was assuming office at a trying time for the country, a situation he said required the cooperation of the judiciary to develop the country .

He stressed the need for the judiciary to specifically assist the executive in reinvigorating the country in terms of security and managing it efficiently, while making sure that the economy was resuscitated and the security of doing business was guaranteed.

Earlier in his brief remarks after‎ taking the oath of allegiance, Justice Onnoghen described the moment as overwhelming, but assured the president of the fullest cooperation of the third arm of government, especially at the existing stage of the nation's development and the fight against graft.

While thanking Buhari for the confidence reposed in him, the acting CJN promised to continue from where his predecessors had stopped in the struggle to build a better judiciary for the country.

The 66 year-old Onnoghen who became a Justice of the Supreme Court in 2005, said: “‎At this state in our development and thought programme, I assure you of the fullest cooperation of the third arm of government in the continuation of the war against corruption and misconduct in the judiciary.

“Where my predecessors stopped I intend to carry on from there, modify certain areas but with the general ultimate aim of having a better judiciary befitting the nation Nigeria.‎ Thank you for the confidence reposed in me and by the grace of God we shall succeed.”

Justice Mohammed ‎urged Nigerians to assist the government “to fish out those corrupt elements within the judiciary.” Fielding questions from State House correspondents immediately after the ceremony, the former CJN said there was the need to fight with vigour in order to deliver a clean judiciary for the nation, and assist in revamping the economy for the interest of Nigerians.

Earlier at the valedictory session held in his honour, Justice Mohammed had reiterated that the independence of judiciary remained a prerequisite for efficient functioning of the society. He said the judiciary as an institution must be protected and carefully handled.

His words: “The independence of the judiciary is a condicio sine qua non for any civilised society to function effectively and peacefully. It is an institution which, more than any other, must be protected, sustained and carefully handled. We must therefore continue to guard the eternal flame of justice in our land in order to ensure that it is not extinguished.

“Where the rule of law is absent and due process disregarded, then the sentinel of civilisation is missing and I am sure we would not desire to see the results that such loss causes.”

Despite the allegations against the third arm of government, Justice Mohammed said he was proud of the judiciary, noting that Nigeria as a nation owed the sector gratitude for guarding the nation's democracy against threatening political winds.

“Our nation owes the judiciary a debt of gratitude for standing firm in the face of contrary winds that threatened to blow our nation's democracy off course.

“During the run-up to the 2015 elections, our judicial officers withstood immense pressure in order to guarantee a level playing field and smooth transition of government, which ensured that we were spared a re-enactment of the June 12 saga.

“I must particularly commend the Supreme Court for refusing to be intimidated or influenced by any candidate or political party, and I make no apologies for the firm stand that we took in our decisions.

“I am proud to be a part of the Supreme Court which refused to be cowered into truncating the electoral process. I am proud to have headed this noble arm of government and steering it through some very stormy waters.

“I am proud of the Nigerian judiciary. Indeed, the need to protect the institutions of the judiciary from undue influence was a key concern of mine during my tenure,” the former CJN said.