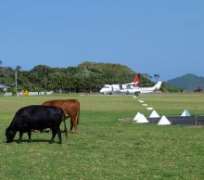 Tragedy was averted, yesterday, when a fully-loaded plane of Air Peace had to abort landing at Sam Mbakwe Airport, Owerri, when the pilot discovered that the runway had been invaded by cows.

A passenger aboard the flight, Mr. Richard Akinnola, who narrated the incident to Vanguard, said the pilot was forced to hover around the airport until the runway was cleared by the airport security. The panic-stricken passengers, who initially thought the pilot deliberately aborted landing, applauded him on being told that a major disaster had been averted as the landing runway had been taken over by cattle.

This is not the first time a major airport runway was invaded by cows. The Port Harcourt International Airport runway was sometime ago invaded by cows and an approaching Air France plane collided with some of the cows. The expertise of the pilot saved what would have been a tragic incident as the plane was only slightly damaged with passengers suffering shock. The Federal Government was saddled with the burden of repairing the damaged plane.

Contacted on phone by Vanguard on the Sam Mbakwe Airport/Air Peace incident, the acting General Manager, Public Affairs, Federal Airports Authority of Nigeria, FAAN, Mrs Henrrietta Yakubu, said she had not been briefed and promised to get back to Vanguard. Efforts to get the reaction of the Public Relations Manager of Air Peace proved abortive.