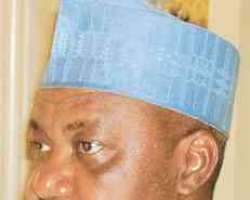 Kaduna State Gov, Namadi Sambo
Twenty-four hours after Governor Namadi Sambo of Kaduna State was picked to serve as vice-president, the Presidency is still processing his nomination for onward transmission to the National Assembly for confirmation.

The Special Adviser to the President on National Assembly Matters, Senator Dr. Aba Aji, told one of our correspondents on Thursday that his office was yet to receive the communication on the vice-presidential nominee.

He said, 'The nomination is still being processed and I believe that as soon as that is done, it will be forwarded. You know the President travelled. He is in Kaduna right now (Thursday). Once the nomination process is ready, we will let you know.'

Asked how soon the communication would be made, Aji said he could not tell as doing so would amount to a speculation.

He said the time of submission of the nominee's name to the National Assembly would be determined by the time the letter got to his office.

The Chairman of the Senate Committee on Information and Media, Chief Ayogu Eze, said that the Senate would not delay in screening the nominee the moment his name reached it.

One of our correspondents gathered that Sambo would be screened on Tuesday by a joint session of the National Assembly.

A source at the National Assembly said that the leadership of both chambers had agreed to hold the joint session.

The Secretary to the Government of the Federation, Alhaji Yayale Ahmed; Senator Ahmed Makarfi; Governors Isa Yuguda (Bauchi); Babangida Aliyu (Niger); Danjuma Goje (Gombe); and Sule Lamido (Jigawa) had featured among those that were reported to be the top contenders for the job.

Northern Senators Forum and their colleagues in the House of Representatives endorsed Senator Ahmed Makarfi as the candidate for the office, a decision that was criticised by the Senate Chief Whip, Senator Kanti Bello.

Sambo was a surprise nomination because his name did not feature among those reported to have been pencilled for the job.

The Kaduna governor had last Tuesday led a delegation of traditional rulers to congratulate Jonathan on his elevation as President following the death of former President Umaru Yar'Adua.

He later had a meeting behind closed-door with Jonathan where, it was learnt that the offer to become vice-president was made to him.

One of our correspondents also gathered that Jonathan preferred Sambo because both of them had worked at the National Economic Council and power projects.

Besides, he was said not to be ambitious and might not pose any problem for the President. It was also gathered that what worked in favour of Sambo was the fact that some of the front runners had reportedly set up machinery for their presidential ambitions even when they had not got the VP seat.

Meanwhile, the Chairman of the Conference of Nigerian Political Parties, Alhaji Balarabe Musa, on Thursday said that he was not impressed by the nomination of Sambo because nothing positive could come out of the Peoples Democratic Party-led Federal Government.

The CNPP chairman, who was a former governor of old Kaduna State, said the emergence of the Kaduna State governor would not make any difference in the governance of the nation because of the bankruptcy of the PDP.

In a telephone interview with one of our correspondents, Iko-Awaji, queried the criteria used in choosing the governor as the vice-president.

He said, 'I don't have much problem with him (Sambo). But the truth is that Sambo has not done well as a governor. I challenge him to show Nigerians what he has achieved as a governor within the past three years.'

Also, a professor of political science, Femi Otubanjo, said the intrigues that trailed the nomination of Sambo did not suggest that he would become the eventual candidate.

In Kaduna State, there were mixed feelings over Sambo's nomination. There were jubilations among people of Southern Kaduna, where the state Deputy Governor, Mr. Patrik Yakowa, hails from.

While Southern Kaduna is dominated by Christians, the Northern part is mainly inhabitated by Muslims.

He said, 'As for the implication of Governor Sambo's choice for the post of the vice -president to Southern Kaduna people, I will say that that is the demonstration of God's sovereignty in the affairs of men.'

Also, a former Secretary- General of the Arewa Consultative Forum, Col. Hamid Alli, said that the President should let Nigerians know the criteria for choosing Sambo.

At the Sir Kashim Ibrahim Government House, where the governor's office and official residence are located, there were more visitors as elated supporters of Sambo besieged the vicinity to felicitate with him. Sambo was, however, absent from the government house.