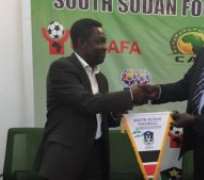 At least nine people were killed and 11 wounded in South Sudan’s capital, Juba, when an unidentified gunman opened fire on people watching a football match on television at the weekend, a police spokesman said on Monday.

The motive for the attack on Saturday night in Juba’s southwestern suburb of Gure was not immediately clear.

South Sudan has been plagued by violence since a civil war erupted in December 2013, although it was not clear if the shooting was linked to political tensions. South Sudan, a poor, oil producing nation, is awash with arms.

“The investigation is going on,” South Sudan police spokesman Daniel Justin said. He said six people were killed at the scene and three died on the way to hospital.

Juba was the scene of fresh fighting in July between troops loyal to President Salva Kiir and those of his rival Riek Machar.

Machar, who had returned to the capital to resume the post of vice president weeks earlier, fled Juba during that flare-up and is now abroad.