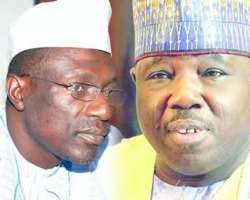 The Chairman of the Peoples Democratic Party (PDP) Caretaker Committee, Senator Ahmed Mohammed Makarfi, has said  that the party would resist any plan to impose any candidate on the PDP in the forthcoming Ondo State governorship election.

Makarfi, who spoke in Kaduna State, on Saturday, said that the unfolding scenario as a result of the crisis that emerged  from the dispute over Independent National Electoral Commission's (INEC) approval of the candidature of Mr Jimoh Ibrahim as PDP candidate for the governorship election was an indication that Senator Ali Modu Sherriff has abandoned the reconciliation move in the party.

He accused Sherriff of playing to an alleged grand design by the ruling party, All Progressive Congress (APC), to win the election, saying that his caretaker committee would continue to deploy legal and political means to ensure the victory of the rightful PDP candidate in the state.

Makarfi, who spoke on how Senator Sheriff had frustrated the peace and reconciliation moves in the PDP, said that the opposition party would reorganise itself as a formidable force to be reckoned with in the country within the next six months in order to salvage the nation from the hands of APC.

Expressing dismay at the action of INEC in the preparation for the election, he said: 'I don't know what pressurised INEC to come out with the decision it took', pointing out that 'what I read is that they acted on the orders of a court of law and not on the basis of what they believe was right as a body authorised to know the true status of political parties and the true status of the primaries conducted for the nomination of candidates.

'I want you to recall that we gave INEC relevant notices as stipulated by law, they observed our primaries and they took our nomination. It was reported that the other side did primaries at midnight in Ibadan, Oyo State.

It was not covered by INEC or any authority for that matter. So, if a court of law gives INEC some orders that INEC, for whatever reason felt compelled at that time to comply with. It is unfortunate, that no even such court of law in the first instance should give such an order.

'They are ignoring all the other laws relating to regulations and how candidates should emerge. Be that as it may, it has been our principles not to personalise issues because our judicial system provides for appeal process and we have appealed.

'And we have absolute confidence that the appellate court should be able before the election date, determines the legitimate candidate of the PDP,' he said.

Senator Makarfi also dwelt on the Memorandum of Understanding (MOU) signed for peace and reconciliation in the PDP by the factions in dispute has been violated by the Sheriff group.

Said he: 'before we signed that MOU and before the leader that convened us, the understanding we reached before him (and people can ask him, he will attest to that) was that the other side will join the caretaker committee.

And that was the basic agreement that was reached. And then, we agreed that we should set up an equal number ofparty men and women that would sit down look at the modality of integrating the two sides into the caretaker committee and also draw the modality for the withdrawal of all court cases or consensual settlement of the cases that withdrawal is not the best option but to have a clear legal determination of the matter'.

'But, let it be something that we all consent to so as to prevent future litigation. Because some gaps, if you leave them now in the name of peace, somebody else, may not be Modu Sherrif or anybody associated with Modu Sherrif, it can be anybody else, anytime can still go to court asking the same issues to be determined.

Now, let us use this and work together to mutually determine all those contentious

issues that we commonly agreed to so that we prevent such issues coming up in the future. That is the general understanding.'