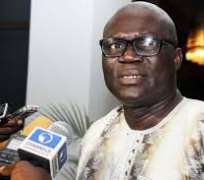 Former presidential spokesperson, Reuben Abati, is out the custody of the Economic and Financial Crimes Commission.

The anti-graft agency had arrested the columnist few weeks ago  on the allegation that he benefited  from funds misappropriated by the Office of the former National Security Adviser, ONSA.

Abati reported himself at the anti-graft office on October 21 following a notice by the agency that he was being sought as an alleged beneficiary of fraud.

After initially working out a repayment of N5 million with the EFCC, Mr. Abati later told his interrogators that he would not be able to raise any reimbursement, a stalemate that apparently prolonged his stay in custody.

The Rainbow could not immediately reach the EFCC spokesman, Wilson Uwajaren for confirmation, but sources close to Abati said confirmed the report.

EFCC had earlier granted Abati bail after asking him to drop his International Passport and produce a surety of not below level 16 in the Civil Service as part of the conditions for his release.