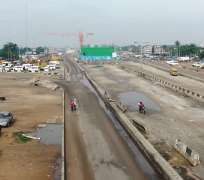 Lagos State Governor, Mr. Akinwunmi Ambode on Thursday assured residents that the ongoing Lagos-Badagry Expressway Expansion project would be completed before the end of 2019.

The Governor, who spoke shortly after embarking on extensive inspection of ongoing projects across the State, said the project was a major economic catalyst for Lagos and therefore his administration was totally committed to seeing it through.

Recalling that his recent visit to Denmark was to finalise plans with APM Terminals to fast-track the commencement of work on the $2.6billion Badagry Deep Sea Port, Governor Ambode said it was important for the road network to be completed within schedule to accommodate the anticipated increase in economic activities within the axis.

'On the part of government, it is imperative that the project is accelerated and completed on schedule. It is a 10-lane expansion project with a provision for rail,' he said.

Governor Ambode said that though the project was awarded to Okokomaiko, his administration was almost at financial close to give it to a concessionaire who is expected to extend the project from Okokomaiko to Seme Border.

'We believe strongly that the contractor has done a good job here. We have given him the right of way and it is our belief that the one that has been awarded should be completed on schedule. I am committed to this project; I am committed to the expansion of the economy of the East axis of Lagos. That is the surest way to go.

'By doing this project, we would also expand the real estate value of this axis and the tourism potentials of the Badagry axis. I am confident that in no time, we should have a complete project before the end of 2019,' he said.

He noted that the challenge of relocating pipes and cables belonging to the Nigeria National Petroleum Corporation (NNPC) which hitherto slowed down the project had been resolved through the intervention of Governor Ambode.

While inspecting the stretch of link road from Agbelekale off Ekoro Road to Abesan Estate via Church Street, Giwa and Aboru, Governor Ambode expressed satisfaction with the progress of the project so far, but charged the contractor and supervisors to ensure the delivery of the project within the first quarter of 2017.

The Governor, who was received amidst fanfare by residents who displayed placard of various inscriptions commending him for the project, said the bridge being constructed as part of the project had to be extended from 240meters to 360meters due to the nature of soil in the area.

He said: “Just about five months ago, we were here to see the progress of this project. This road is designed to connect all the people living in the Aboru area to Iyana-Ipaja and also to the LASU-Iba road and all the people living within the Ajasa Community. You will recall also that just about three months ago, we were here to open up the Ajasa Command road and this is another project to complement the opening up of the Alimosho community.

“Like the contractor has promised, we hope to finish this project by the end of January next year. We have also found out that we need to extend this bridge by an additional 120 meters because of the nature of the soil in this area. I had earlier promised that this project would be delivered by the end of this year but I’m pleased with the progress being made on this project. I want to urge the contractors and the supervisors to ensure that we meet the completion date and that within the first quarter of next year, all the people in Alimosho will enjoy this facility,” he said.

At Irede Road in Oriade Local Council Development Area (LCDA), Governor Ambode was briefed by the Commissioners for Works and Infrastructure, Engr. Ganiyu Johnson and Housing, Mr. Gbolahan Lawal, who narrated the inter-ministerial work being planned for the axis.

Lawal said a 30 hectare land at Ado Trade Fair had already been designated for a 500 Housing Units which would be constructed in partnership with the private sector.

He said the project, which is a transit oriented development, would open up the area for economic activities and real estate, adding that it would complement the 13 stations of the Blue Line Rail Project and 10-lane Lagos-Badagry Express road.

In his response, Governor Ambode expressed displeasure with the state of Irede Road, assuring that work would start on the road within the next four weeks.

He said: “It is very clear that this Irede road is in a very deplorable condition. I have come personally to see it and I have received complaints from people of this community. I also see that the economic value that we stand to benefit from upgrading this road is unquantifiable.

“Beyond the fact that we will open up the road to the Lagos Badagry Expressway, we also intend to expand our housing policy and the rent-to-own scheme to this neighbourhood. So, I like to just clearly state that work would commence on Irede Road within the next four weeks,” he said.