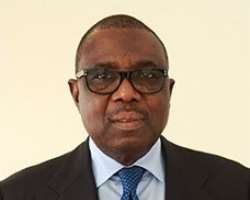 This follows the retirement of the erstwhile Chairman of the Bank, Chief (Dr.) Christopher Ezeh who, after over 11 years of meritorious service to the Bank has retired, having attained the retirement age for non-executive Directors in line with the Bank's policy.

The Board also approved the appointment of Mr. Charles Chidebe Umolu and Mr. Kings C. Akuma as Non- Executive Directors of the Bank.

These appointments are subject to the approval of the Central Bank of Nigeria (CBN).

A Fellow of the Chartered Institute of Bankers of Nigeria, Mr. Ebi has participated in several Management Development Courses both locally and overseas in the areas of Strategic Planning, Financial and Risk Management amongst others. Some of the notable leading institutions where he received Executive education include  IMD Switzerland, Harvard, Oxford-Said Business School, amongst others.

He started his working career in the United States of America (USA) as an Accounts Technician with the National Association of Counties, Washington DC in 1976 and subsequently worked at the Federal Savings & Loans Association Washington DC where he served as the Assistant Vice-President Community Federal Savings & loans Association. In a very distinguished career within the financial services industry, Mr. Ebi went on to serve in leadership positions in various notable banking sector organizations where he acquired mastery of executive leadership, financial goals delivery, business management, human resources capacity building, and general business performance management. He served as the Chairman of Deputies of the Group of Twenty-four countries (G24 countries) and as Director of Afromedia PLC until July 28, 2015.

He serves as the Member of the Governing Board of Venture Garden Nigeria and has been an Independent Non-Executive Director of Dangote Cement Plc since January 30, 2014

Apart from the corporate world, he has served extensively on many for profit as well as not-for profit Organisations. He supports Worldvision and is also involved in various other humanitarian causes, especially in fundraising to promote its programs across the nation.

Mr. Ebi attended Holy Ghost College Owerri from 1970 and Howard University, Washington DC, where he graduated with a Bachelor of Business degree in Marketing in 1978 and a Master's Degree in Business Administration in 1979. He is and holds the National Award; MFR. Mr, Ernest Ebi  is married with kids.