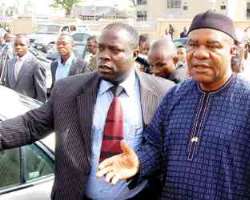 Governors elected on the platform of the Peoples Democratic Party on Wednesday night met with President Goodluck Jonathan, to plead with him to save the embattled National Chairman of the party, Chief Vincent Ogbulafor.

The governors had earlier met for about an hour at the Kwara Governor's Lodge, in Asokoro, Abuja, where they discussed the travails of the PDP chairman.

Ogbulafor and three others are currently standing trial at an Abuja High Court for the alleged misappropriation of N104m during his tenure as minister of Special Duties.

At the end of the meeting, the governors left without addressing journalists, who were eagerly waiting for a briefing.

He said the governors believed that Ogbulafor was being hounded by unnamed interests in the party because he had said publicly in March that the party's 2011 presidential ticket would be given to the North.

'We are going to the Villa to appeal to the President to help spare our chairman,' the governor said.

Three South-East governors had after a meeting with the President on Monday advised Ogbulafor to quit. A top PDP source claimed that the governors were advised by the President after their meeting with him in Abuja to tell the embattled PDP chairman to tow the path of honour by resigning.

Ogbulafor had on Wednesday told journalists after the PDP National Working Committee paid tribute to the late former President Umaru Yar'Adua, said that he would not quit his position.

The chairman said that he was still performing his duties and that there was no reason for him to quit.

'I am still the chairman and you can see that I am still acting; I have not resigned and there is no such plan,' Ogbulafor said, adding that he would not speak on the call by three South-East governors on him to resign.

He said that members of the NWC 'decided to sacrifice our meeting of today (Wednesday) to honour the late President who was a gentleman to the core.'

The PDP chairman described the late president as a man with impeccable character who solved the party's problems to the latter.

'He listened to us and was attending our meetings regularly, except when he felt sick. You all know that all of us prayed fervently for him but he died. All of us will one day die and join him,' Ogbulafor said.

The PDPchairman, said that he would not yield to their advice by the three PDP governors since he was not elected by the governors from his geo-political zone alone.

He described as speculative, the rumours making the rounds that he had resigned from office.

Ogbulafor said, 'I want to gladly tell you that it is a speculation in the air. I have not resigned from my office as the national chairman of PDP.'

When asked to name those behind the speculation, he said, 'I don't know who is putting the story in the air.' He also said that he was not under pressure, adding that the party under his leadership was intact.

'You know I have an allegation in court which is in court and I appeared in court two days ago and got bail my case is still on if I am found guilty I'll be glad to throw in the towel but I have not been found guilty. So I'll stay and do my job and make sure there is internal democracy in the party.'

He also described his relationship with Jonathan as excellent, saying that he was still loyal to him.