My appointments were broad based, no detention of critics under me: Jonathan 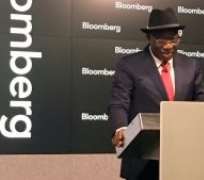 The former Nigerian leader spoke at a dinner he attended in the United States on Saturday evening.

“I urge the Nigerian lawyers in the US and those in the Diaspora to do their best to support the democratic institutions we have built,” Mr. Jonathan said.

The former president was the keynote speaker at the Nigerian Lawyers Association's annual dinner and merit awards ceremony which held in New York.

In his speech posted on his Twitter page on Saturday, Mr. Jonathan mentioned some factors he considered to be his administration's democratic credentials.

“Under my watch not a single Nigerian was sent to prison because of anything they wrote or said about me or the administration that I headed,” Mr. Jonathan said. “Nigeria had neither political prisoners nor political exile under my administration.”

Mr. Jonathan's speech on Saturday comes at a time several of his aides are being detained and some prosecuted for alleged corrupt practices while many others have since absconded from the country.

Some of Mr. Jonathan's former aides being prosecuted include ex-NSA Sambo Dasuki and former presidential aide Waripamowei Dudafa. Others being investigated and currently in detention include former presidential spokesperson, Reuben Abati, and ex-Abuja minister Bala Mohammed. Some others like former aide Kingsley Kuku and ex-petroleum minister Diezani Alison-Madueke have since left the country allegedly to avoid prosecution.

In Abia State, Governor Okezie Ikpeazu admitted to plotting the arrest of a blogger and indigene of his state, Emenike Iroegbu.

In Katsina, a blogger was arrested and detained for 22 days for posts criticising the administration of Governor Aminu Masari.

Within this period, PREMIUM TIMES reported no fewer than five cases of individuals being arrested and charged – or released – by the authorities for offences bordering on expressions.

In his speech, Mr. Jonathan also argued strongly for Nigeria's diversity and its inherent benefits.

“Diversity could remain a strength only when all interest groups in the society feel safe and secure,” Mr. Jonathan said while speaking on the theme 'Diversity As Our Bridge to Tomorrow.”

The former president said he carefully selected his cabinet members to reflect the diversity of Nigeria and warned against exploitation of the country's fault lines by any leader.

“Most of my principal aides in government hailed from different ethnic nationalities,” Mr. Jonathan said. “We never placed ethno-religious interests above merits or individual values when making decisions.

“Nigeria is for all Nigerians. We must resist the push of ego that may make us want to pursue a regional or narrow agenda.”

Mr. Jonathan ended his speech with a touch on transparency and accountability.

“We enacted the Freedom of Information Act and by that we tore the veil of secrecy covering governance.

“We gave institutions unlimited freedom and ensured that the NBA, other professional institutions were devoid of any governmental influence.

“We ensured that appointments to INEC were not based on personal relationships,” he said.

While Mr. Jonathan did not make any direct reference to the current government in his speech, some Nigerians are already inferring that, with some saying he could be arrested.

On Twitter, a user, @Eloka51, said the former president's unusually critical comments could be a precursor to his arrest.

“Just going through this thread. Looks like GEJ's arrest is around the corner,” the user said.

Mr. Jonathan's comments occur the same day Vice President Yemi Osinbajo spoke at Harvard University during which he said Mr. Jonathan could only be arrested if found culpable after completion of investigations .

Mr. Osinbajo's statement marked most authoritative indication yet that the former president could actually be arrested.

In August, PREMIUM TIMES exclusively reported that Mr. Buhari had ordered investigation of Mr. Jonathan for alleged ties to the resurgent militancy in the Niger-Delta.

The former president denied the allegations.
Mr. Jonathan's wife, Patience, recently had accounts linked to her frozen. She has since filed a suit in court seeking $200 million damages against the anti-graft commission, EFCC, for freezing $15 million she claims is hers.